Looking at the lengthy train journey back to Bangkok and then onto Chiang Mai we decided to break it up a little with a couple of nights in Ayutthaya, once the capital of Siam, and take some time to explore the ruins.

So after a few relaxing days by the sea near Chumpon it was time to head north in search of some history and culture. The vague plan was to stay in Chiang Mai and beyond for a few days after hearing what a funky place it is and then move to our next country, wherever that may be.

Or you can watch the video on YouTube here. While you’re there please subscribe to our channel.

On Your Bike! Cycling Around the Ancient Temples of Ayutthaya

The ancient city is reasonably compact with most of the must see sights contained within the west side of the moated island area. So the perfect way to get yourself around all those stunning ruined temple sights is to hire a bicycle and use some pedal power.

We hired a couple of bikes from our guesthouse for a very reasonable 50 THB each (£1) for 24 hours. The bikes were very basic with just 1 gear but despite setting out early it soon got intensely hot and humid so we didn’t cycle very fast at any point. 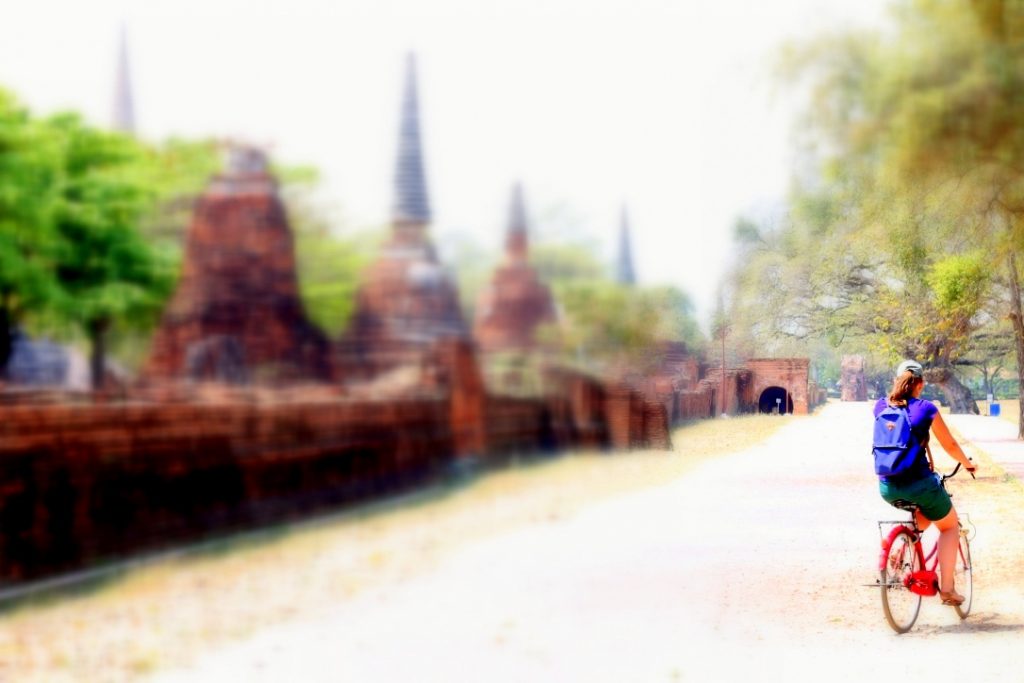 We also got a handy tourist map from our guesthouse which highlighted all the main spots to head for, the first of which, Wat Maha That (Monastery of the Great Relic), was about a 2 minute cycle away.

Entrance to the ruins area was 50 THB per person but as with many of the temple sights you can get a good view of the main structures from outside the walls. Built around the 14th century but destroyed by the 18th it was a royal temple which was home to the Buddha’s relics, so one of the most important complexes in ancient Siam. 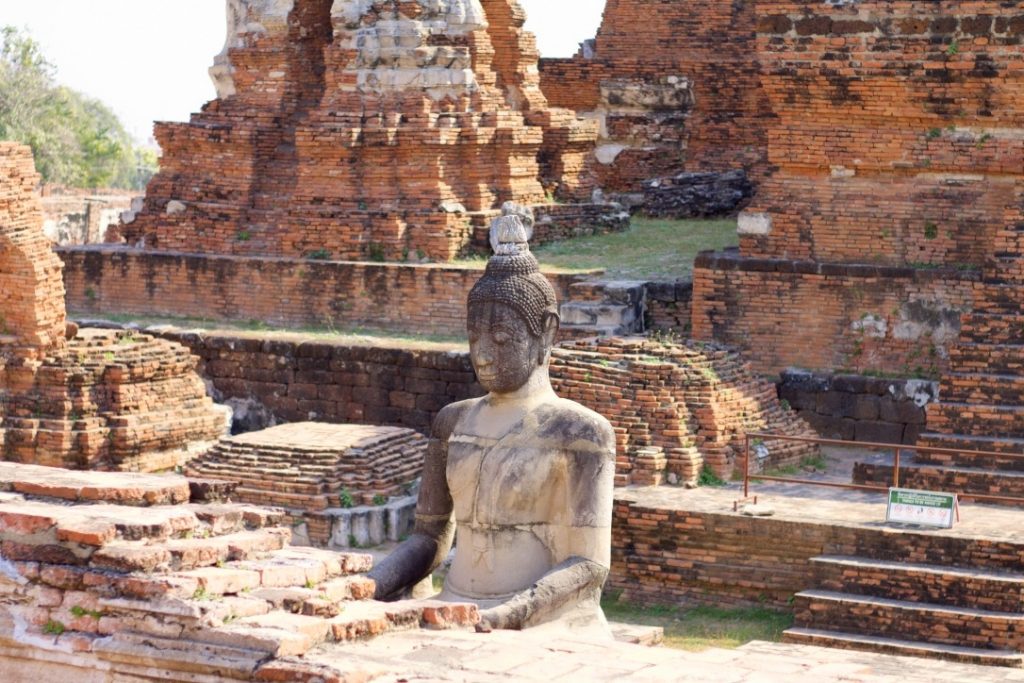 This site is now most famous for the Buddha head entangled in tree roots and it’s become a staple image in much tourists literature about Thailand. It was nice to see it up close and it is considered a highly sacred sight by the locals so has its own security guard sitting close by. 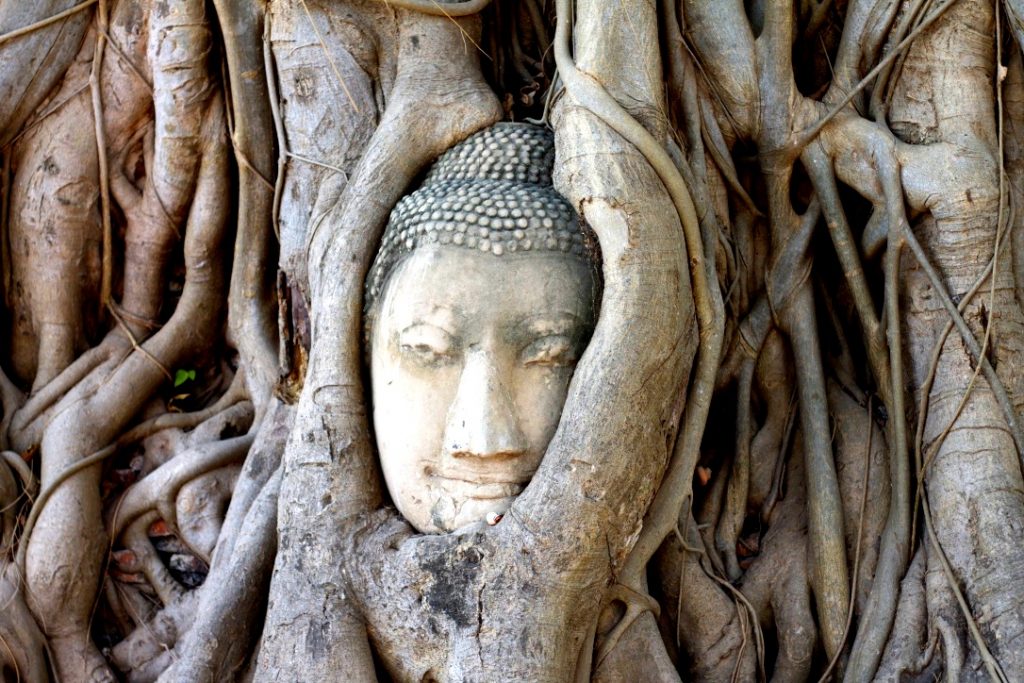 We cycled around for a bit longer, passing some more stunning ruins and trying to stay in the shade as much as possible. Turning a corner we nearly fell off our bikes as just the other side of the fence where about 5 elephants being fed by a few tourists.

I’d read about the Elephant Kraal but didn’t realise we were so close and we were soon cautiously cycling along as more elephants were walking up and down the road ahead. There was even a designated ‘Elephant Crossing’ point where we stopped and watched in awe as they slowly plodded across the road, stopping the oncoming traffic, as the gleeful passengers waved from on high. 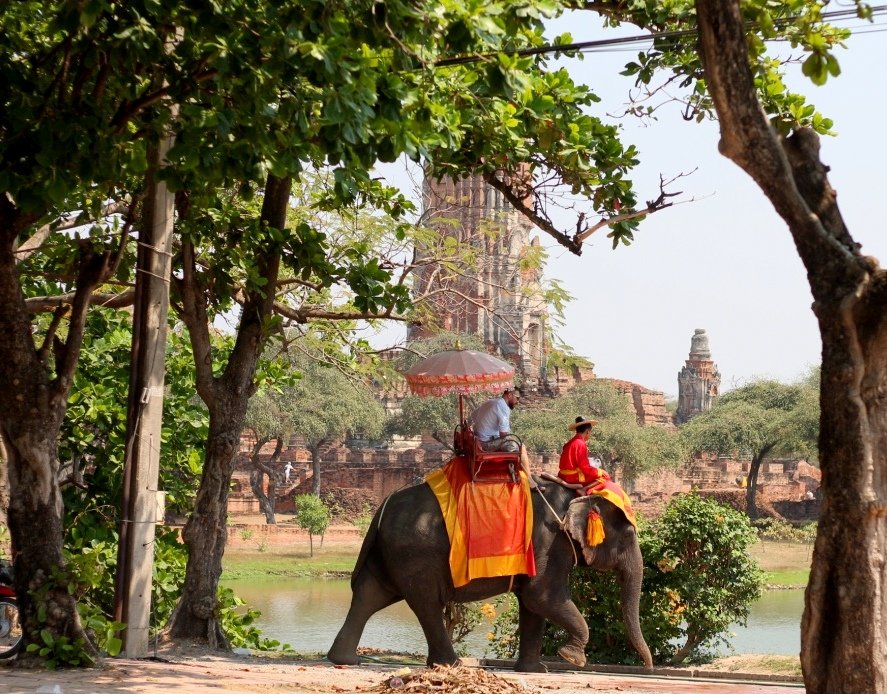 This kind of stuff gives us both mixed feelings, we don’t like to see any animals being exploited for profit but realise that the money paid goes to helping look after them. Still it’s not really our thing and we were not interested in taking a ride around the city on an Elephant so it was back on the bikes.

Our final stop was the impressive ruins of Wat Phra Si Sanphet (Temple of the Holy, Splendid Omniscient), the holiest temple on the site of the Royal Palace and home to the ashes of royalty. It was another 50 THB to enter but I’m sure you could sneak in the back gate if you really wanted to. The 3 Chedi structures in the centre have been partly restored so you get a decent idea of how impressive the site must have looked when it was first completed. 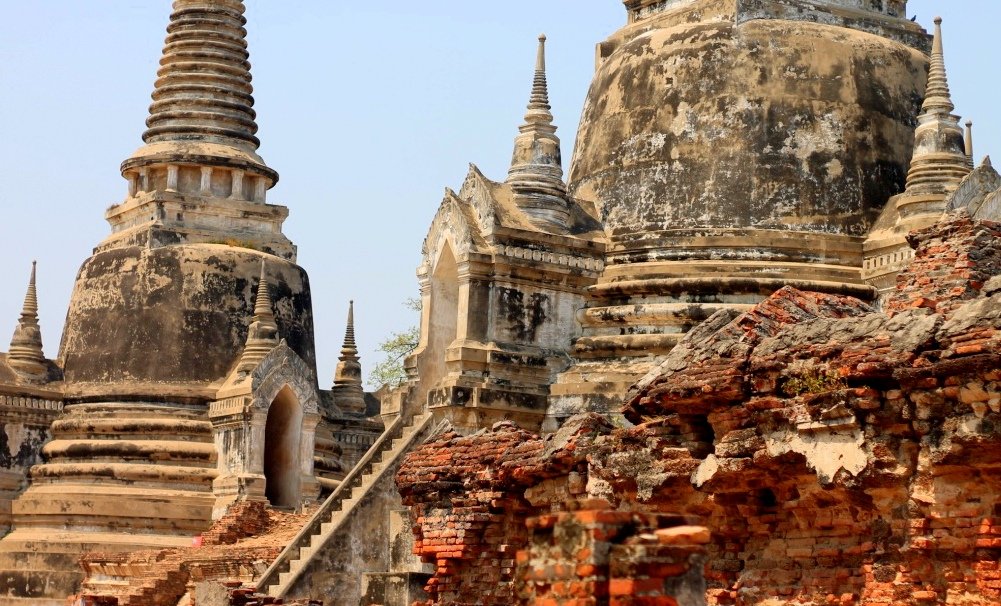 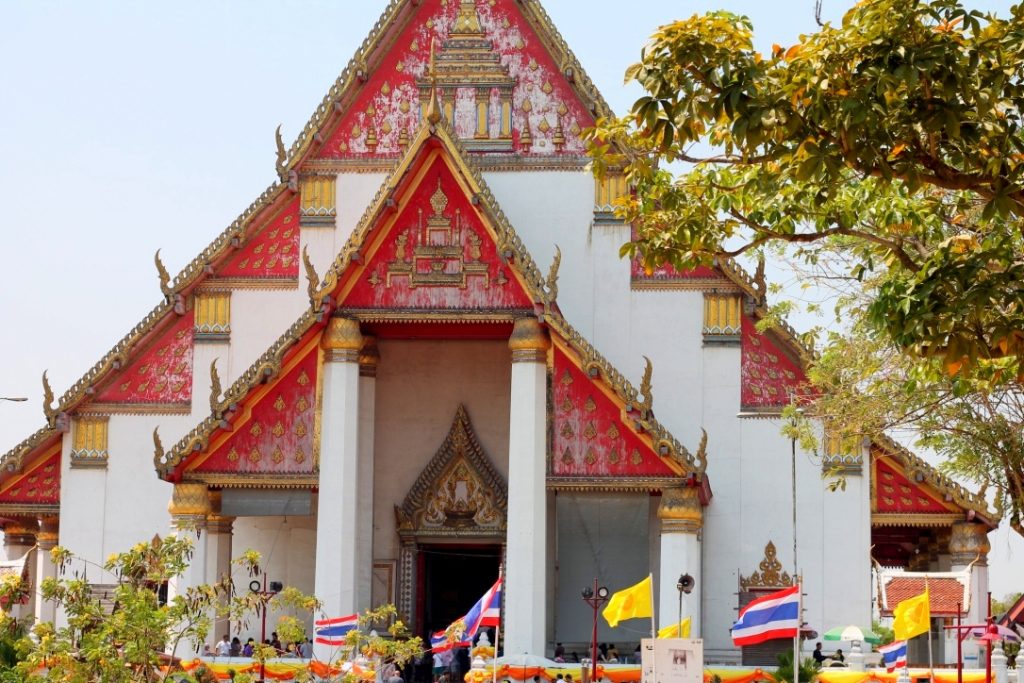 By this stage it was early afternoon and we felt ‘ruined’ (sorry!) for the day so peddled back to our guest house for a much needed shower and rest. 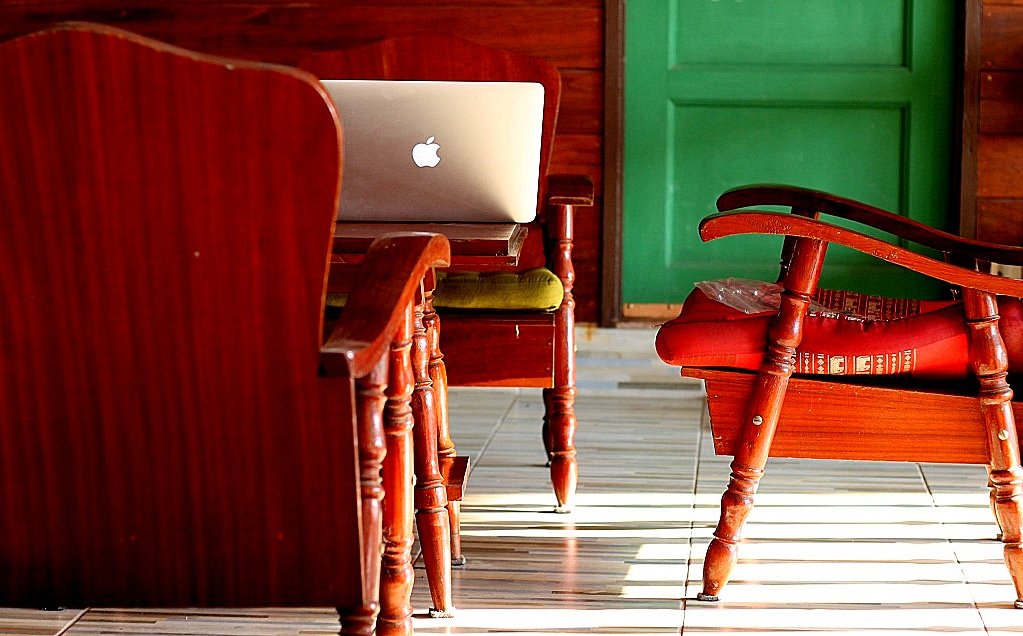 As with most places popular with visitors in Thailand, Ayutthaya has something to suit every budget from hostels to boutique hotels. We had a search on Airbnb for some places and settled on the Chommuang Guesthouse because of the location and reviews and it turned out to be a great choice.

The place had a hostel feel with all the rooms being on the upper floor but it had lots of outside space on a huge communal area so felt far from cramped. There was free tea, coffee, jam and bread which was a nice touch and the owners were super friendly with advice on where to head for good food etc.

Looking back I’m still not entirely sure why we decided to take a 3rd class train from Chumphon back to Bangkok, it seemed like a good idea at the time. At a distance of nearly 500 km we didn’t fancy a bus but left it too late to book a 2nd or even 1st class train back to the capital. We instead opted for a 3rd class train leaving at 7.30pm from Chumphon which pulled into Bangkok Hualamphong station around 5am the next morning.

It was quite an experience to be squashed in on a small double seat, facing backwards with zero legroom as the locals opposite us had stuck their massive bags of rice under all the closest seats. This would have been fine for a few hours ride but about 6 hours in we were really regretting the choice of transportation.

We both tried our best to get some shut-eye but the combination of minimal space, frequent stopping and locals wandering up and down the carriage, shouting loudly whilst trying to sell everything from coffee to giant beans, meant sleep was not really an option. 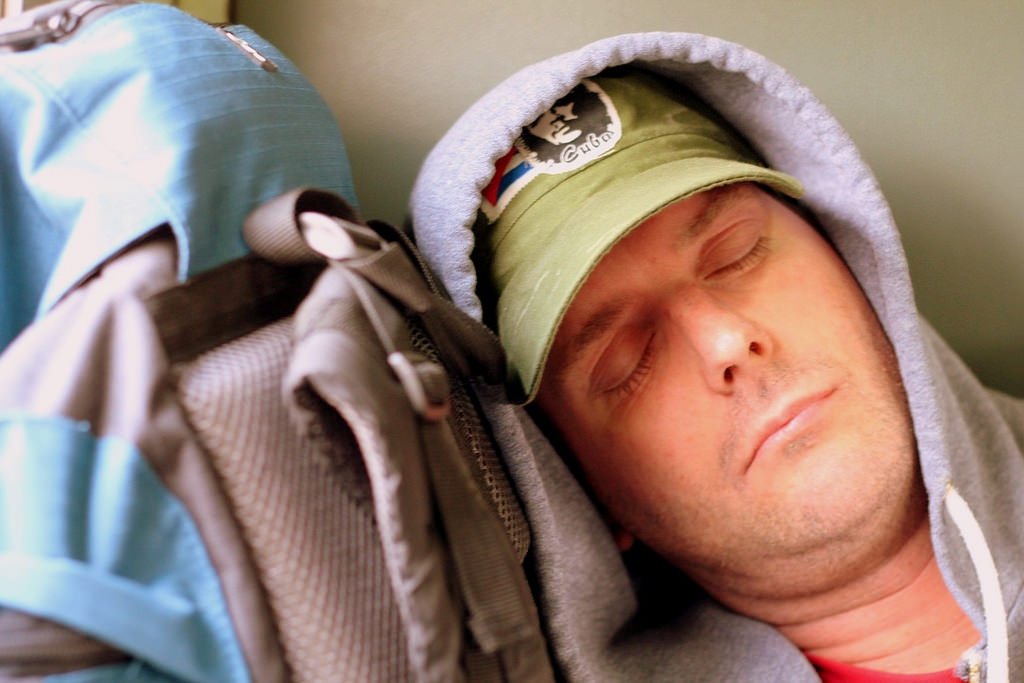 As the train pulled closer to Bangkok it did empty out a little so we could grab a seat each on which to spread out but sleep was still tricky if only for the fear of staying on for the return journey. Eventually at somewhere around 5.20 am the train ground to a halt and we were back in our beloved Bangkok if only for an hour or so. It was certainly a memorable trip and at 192 THB (£3.90) per person one of the cheapest we’ve taken considering the distance.

At the train station ticket office, I got 2 singles to Ayutthaya at a bargain price of 20 THB (£0.40) each. The journey takes around 2 hours and the trains run throughout the day about an hour apart. We took the first one of the day which departed promptly at 6.40 am from Platform 7.

These trains are all 3rd class and used by workers to commute in and out of Bangkok so they stop at quite a few places. There is an express train available but it’s not that much quicker but more expensive.

As you’ve probably noted, 3rd class is very basic with a toilet at the end of each carriage and some fairly hard plastic or wooden seats. It is perfectly fine for the short trip north we were taking, just not the 9-hour experience we had lived through earlier on.

Enjoying reading about trains journeys in Thailand? Read more: How to Travel from Bangkok to Koh Tao, Thailand

Arriving in Ayutthaya by train

When arriving by train it’s an easy journey to get into the centre of the ancient walled city, the bit with the river running around it where most people would be staying. Exit the main station building and head across the road ignoring the Tuk-tuk drivers who tell you it’s miles to where you are staying and will cost at least 100 THB, not true!

Head down the road opposite the station where you’ll see lots of bike hire places and food stalls, handy if you are peckish after the journey. Keep walking to the end of this road (I can’t seem to find the name of it?!) and you’ll see the sign for the river ferry.

It costs a mere 5 THB per person to cross on the ferry and most places are walkable as it’s a small place when you get to the other side. It drops you at the end of the wonderfully named Bang Ian Road and this runs all the way west towards the ruin sites.

If you are arriving by minivan from Bangkok the drop-off point is in the centre and it’s easy to walk to most places from there.

If you want to explore the local area on your own terms then it is easy to find a good local car rental in Ayutthaya to do so.

Is it Worth Visiting Ayutthaya?

I used to lead guided tours to Stonehenge in England and I’ll say here what I used to say to my groups… use your imagination. Some people would see a load of old rocks, others an ancient monument shrouded in the mists of time.

It’s the same deal with Ayutthaya. The main attraction is a glimpse into the glorious past of a once mighty capital city, you just have to apply some imagination and you’ll love it!

At the very least it makes a great stop off for a day or two on the way north to Chiang Mai and beyond. 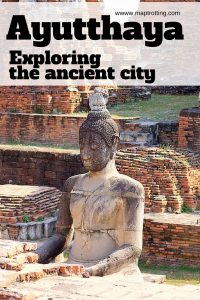 Check out our Ayutthaya Temples walk on gpsmycity.com