If you’re a bit of a Harry Potter fan like us, then you really don’t want to miss seeing the Harry Potter Train, a.k.a “Hogwarts Express”, thundering along on your next trip to Scotland.

J.K. Rowling’s stories came to life in spectacular fashion on the big screen with some stunning locations across the UK providing the perfect backdrop to the wizarding world.

Scotland more than played its part, leaving a smattering of Harry Potter film locations to be discovered by any visiting Potterheads like you.

One of the most iconic is the mighty Glenfinnan Viaduct, lovingly referred to as the Harry Potter Bridge.

It’s here that the Hogwarts Express thundered along, high above the valley, carrying all the students to their next term at Hogwarts.

The great news is that you can watch the “Harry Potter Train” in the exact same location, each day, for free.

How to See the Harry Potter Bridge in Scotland 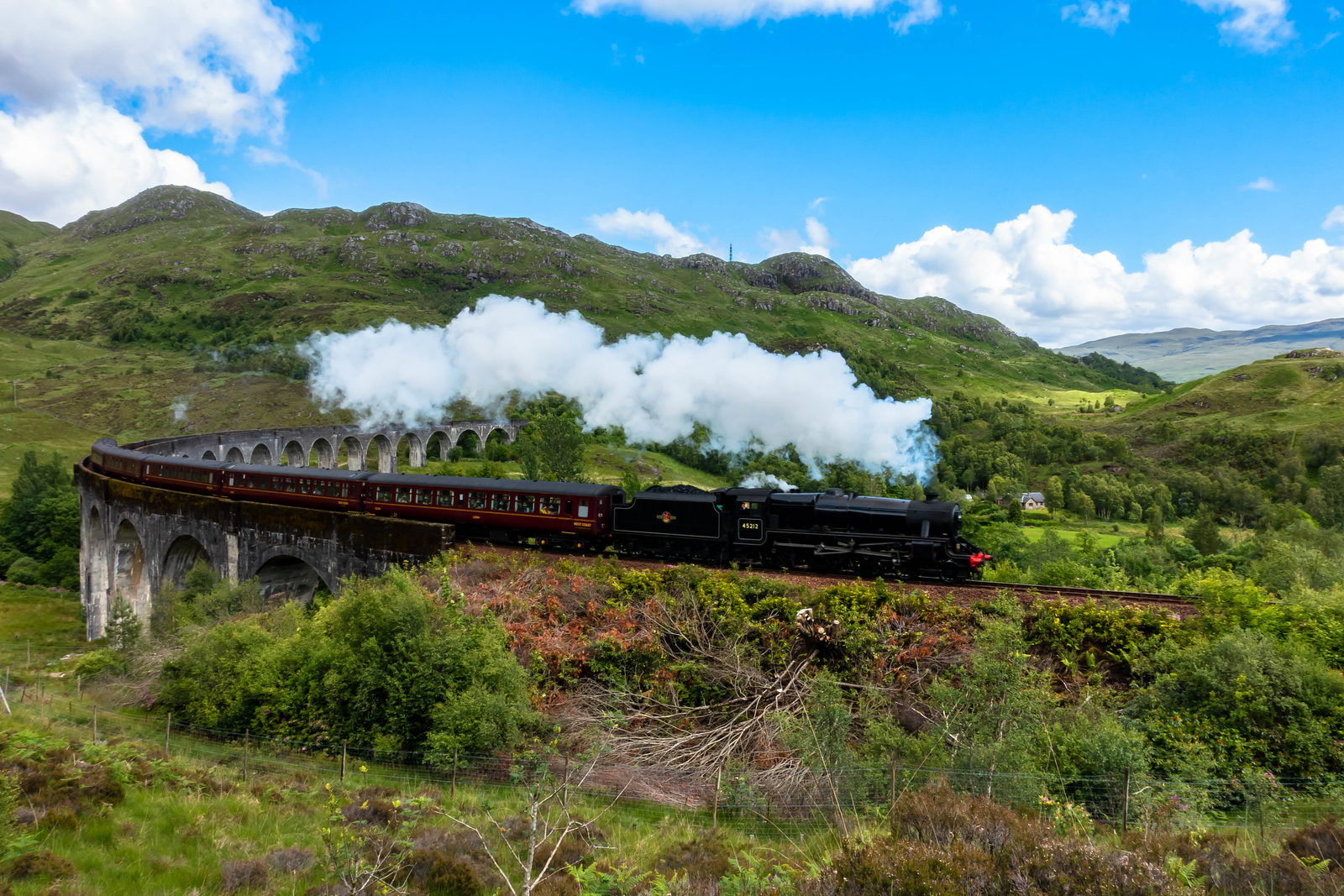 Getting to see this famous movie landmark is easy, even for muggles, and makes a great day trip if you’re based in Edinburgh or Glasgow.

You’ll need to head into the stunning Scottish Highlands and seek out the tiny village of Glenfinnan, huddled on the shore of Loch Shiel. It’s around a 30-minute picturesque drive from the large town of Fort William, known as the gateway to the Scottish Highlands.

Limited public transport, both train and bus, is available between Fort William and Glenfinnan a few times a day but the easiest way is by car. Set the Glenfinnan Visitor Center on your satnav (PH37 4LT) and enjoy the drive!

Once you near the well-signposted Glenfinnan Visitor Center you’ll see the car park right beside it. It’s £3 to park here and can get a little busy around the scheduled steam train times.

TOP TIP: We managed to park a little further up the road outside the church for free and walked back to the start of the trail. There is another free carpark at the trail starting point but that quickly fills up too!

From the visitor centre, follow the well-signposted trail towards the Glenfinnan Viaduct. This takes you right up to the base of the structure for some great photos.

The small plaque here tells us that this mighty rail viaduct was completed in October 1898 at a very reasonable cost of £18,904. Bargain. It’s not looking too shabby either, considering it’s well over a hundred years old!

Just before the footpath reaches the Harry Potter viaduct there’s a signposted trail leading off to the left. Follow this, through the gate and up to the viewpoint. Bingo.

From up here, you can jostle with other Harry Potter fans and train geeks for that all-important snap of the Harry Potter Train as it steams across the viaduct and onwards through the Highlands.

When to Watch the Harry Potter Train Puffing By

It’s important to know that the train timetable changes depending on the time of year and does not run at all in the low season or some weekends in the shoulder season.

2021 UPDATE: Services have now finished for 2021. They will resume running from Monday 4th April to Friday 28th October 2022 (seven days per week).

Based on the 2019 Jacobite Steam Train timetable, here are the times the Harry Potter train will cross the Glenfinnan Viaduct:

To make sure you catch the iconic steam train puffing its way over the Glenfinnan Viaduct, aim to park up around 30 minutes before it’s due to pass by.

That way you can ensure you get a good spot and aren’t sprinting up the hill just as you hear the whistle from the engine!

The Jacobite Steam Train shares the tracks with regular passenger services so, there can be occasional delays or even cancellations to the service.

We got there in plenty of time but the train was delayed and some people started walking back down the hill and missed it passing.

Hold your nerve and wait around, it’s definitely worth it to hear the awesome power of the steam train chugging across the stunning landscape, just like this…

It’s best to check at Glenfinnan Visitors Center once you arrive to confirm the next pass by time and if there are any issues.

How to Ride the Harry Potter Train in Scotland

If you want to go “all in” for the full experience then why not actually ride the Harry Potter train in Scotland.

The steam train is actually called “The Jacobite” and runs as a regular sightseeing experience via West Coast Railways. It puffs back and forth along an 84-mile stretch of the West Highland Line between Fort William and Mallaig in the Scottish Highlands.

The ride along this line was voted as the top rail journey in the world by readers of independent travel magazine Wanderlust in 2009 as proof of its beauty.

If you want to get the full experience you can join onto some great tours running out of Edinburgh. They all feature a ride on the Harry Potter train across the Glenfinnan Viaduct as well as visits to some other stunning Highland locations along the way.

Tours run from 1 to 6 days depending on your time and budget and usually start in Edinburgh. Check out what’s on offer from our partners at GetYourGuide…

The full return train ride takes a good 6 hours so, there’s plenty of time to grab some iconic shots from the train as you sail by the stunning locks and glens in the Scottish Highlands.

When you reach the Glenfinnan Viaduct in the train you can grab a photo like this, just be prepared to hold your ground at the open window! 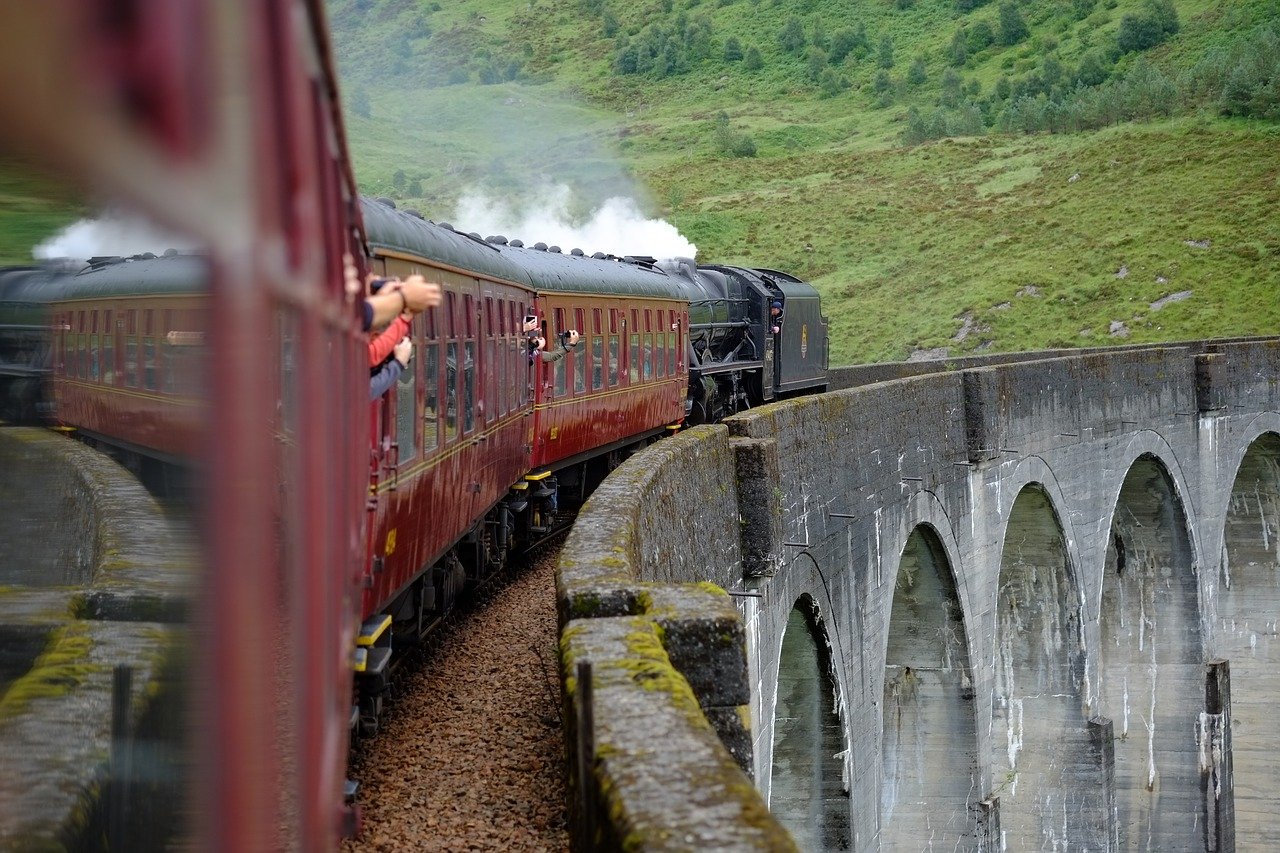 Alternatively, you can book a single or return (round-trip) ride on the train directly at the West Coast Railways site.

If you’re poshing it up in First Class you can even add a cream tea onto your booking for under £20 each to complete the experience. Fancy.

If you are travelling independently then it can be a nice touch to take the Jacobite Train one way from Fort William to Mallaig and then cross to the Isle of Skye via the ferry to Armadale.

Where is the Harry Potter train in Scotland?

The train, known as the Jacobite Express, runs on the stunning line between Fort William and Mallaig through the Scottish Highlands.

Where is the real-life Hogwarts Express?

The Jacobite Train in the Scottish highlands is often referred to as the Hogwarts Express due to the route it takes. The same rail line was used in the Harry Potter films.

How long is the Hogwarts Express train journey?

A round trip on the Jacobite Train takes around 4 hours with a 1-hour 45-minute break in Mallaig.

Will I see Hogwarts Castle?

Many different locations and film sets were used to depict Hogwarts in the Harry Potter films. Unfortunately, you won't see any of them during the train ride through the highlands.

Are you going to ride the Harry Potter train in Scotland? How magical would it be? Let us know in the comments below… 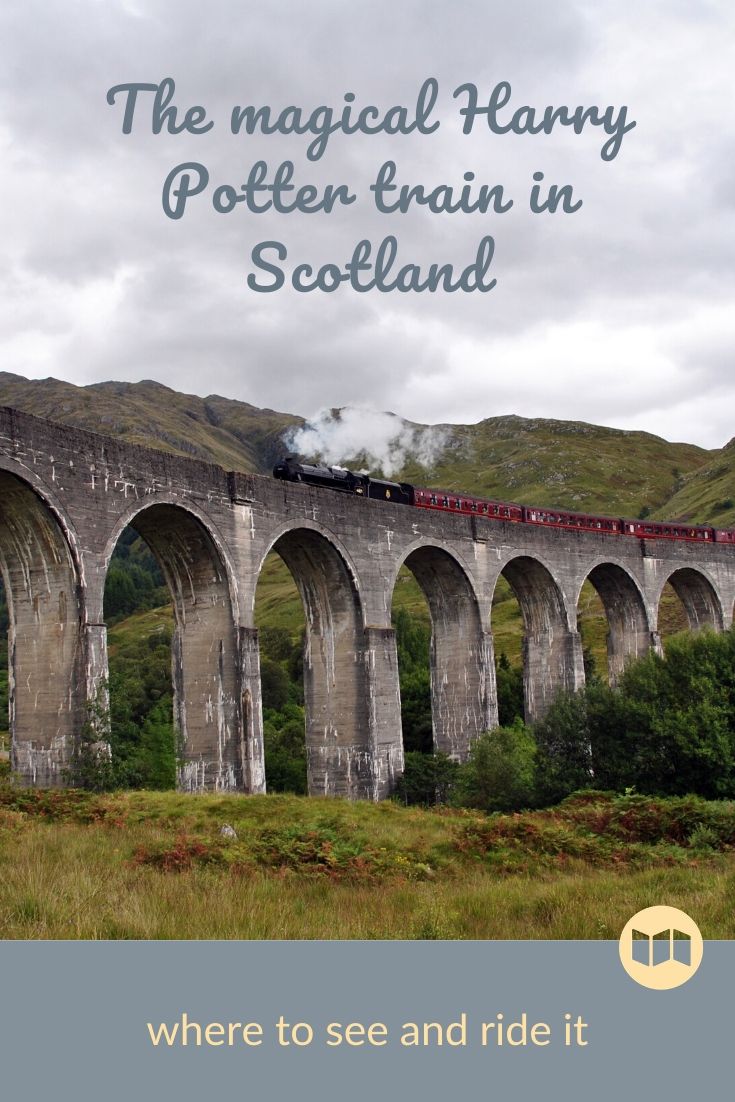 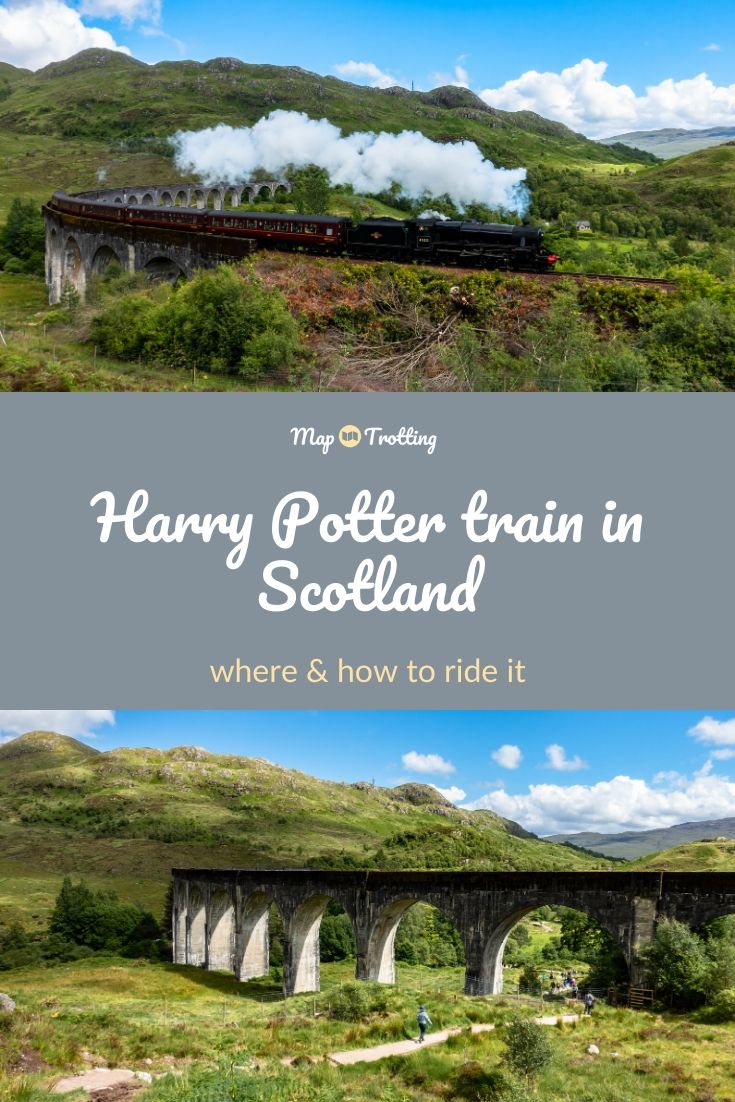 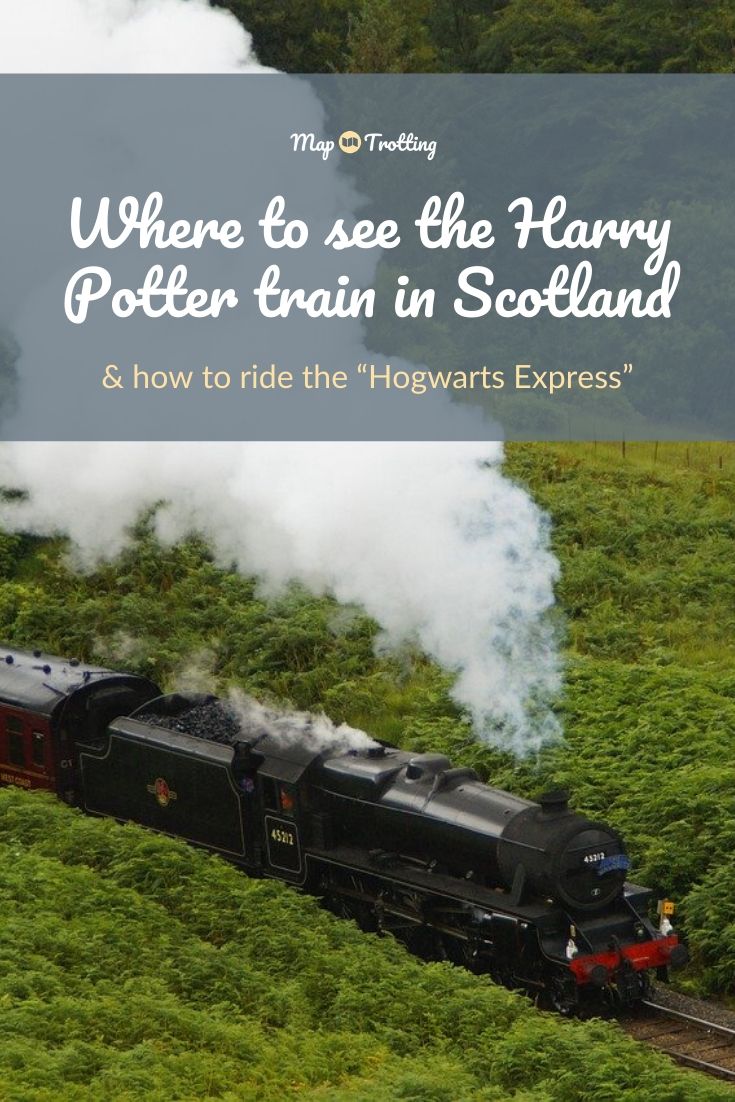