Top Things to Do on Holy Island (Lindisfarne)

Surrounded by the ever-changing North Sea, there are so many interesting things to do on Holy Island. Raided by the Vikings and Scots and now haunted by the ghost of St. Cuthbert, it’s one of the most unique tidal islands in the country that can only be accessed by visitors twice a day.

Top Things to Do on Holy Island

A visit to Holy Island can be a day trip or a weekend getaway, depending on your travelling style. But if you want to explore the coastal route further and visit the medieval town of Alnwick and its spectacular castle sitting on the north coast of England, then be sure to book a day tour from Edinburgh.

We’ve really enjoyed our visit to this tranquil oasis in Northumberland and put together a quick list of top things to do on Holy Island. Enjoy.

Walk Across the Pilgrim’s Causeway

Crossing the Lindisfarne causeway is great fun, but walking across it is a completely different experience. You can park your car just before the causeway and leg it over to the Holy Island. Many people do walk over but just be mindful of the traffic.

For a peaceful and unique experience, take the Pilgrim’s Way, marked with wooden poles. It takes about two hours to cross into the Holy Island so, ensure you have some water with you.

Also, wear a good pair of walking boots as the sandy path can be damp and muddy.

The most important thing – check the tidal times before you set off, more on that later!

Remember that the North Sea can sweep in very quickly and you’ll be stuck on the island for the next few hours.

Leave more than enough time to cross this 3-mile long stretch. It’s best to start walking a few hours before the tide comes in.

A great trip always starts with a refreshing cup of tea or coffee.

A 5-minute walk away from the main car park, you’ll see a Post Office. It’s a post office and a cafe, where Royal Mail Red dominates the interior and the crockery. Cute place.

Take a seat inside and relax with a cup of Northern Edge coffee, sourced from a local micro-roastery in Berwick-upon-Tweed in Northumberland. Or, if it’s warm enough, grab a seat outside in their lovely garden and indulge in a delicious cream tea.

Stroll Along the Northumberland Coast

Once you’ve driven or walked across the causeway, stop at the Holy Island dunes. The beautiful expansive stretch of coast here is peaceful and great for long walks whether you are on your own or with your furry four-legged friends.

Park up for free at “the nook” and take a stroll. It’s the first turning on the left once you’ve crossed the causeway. 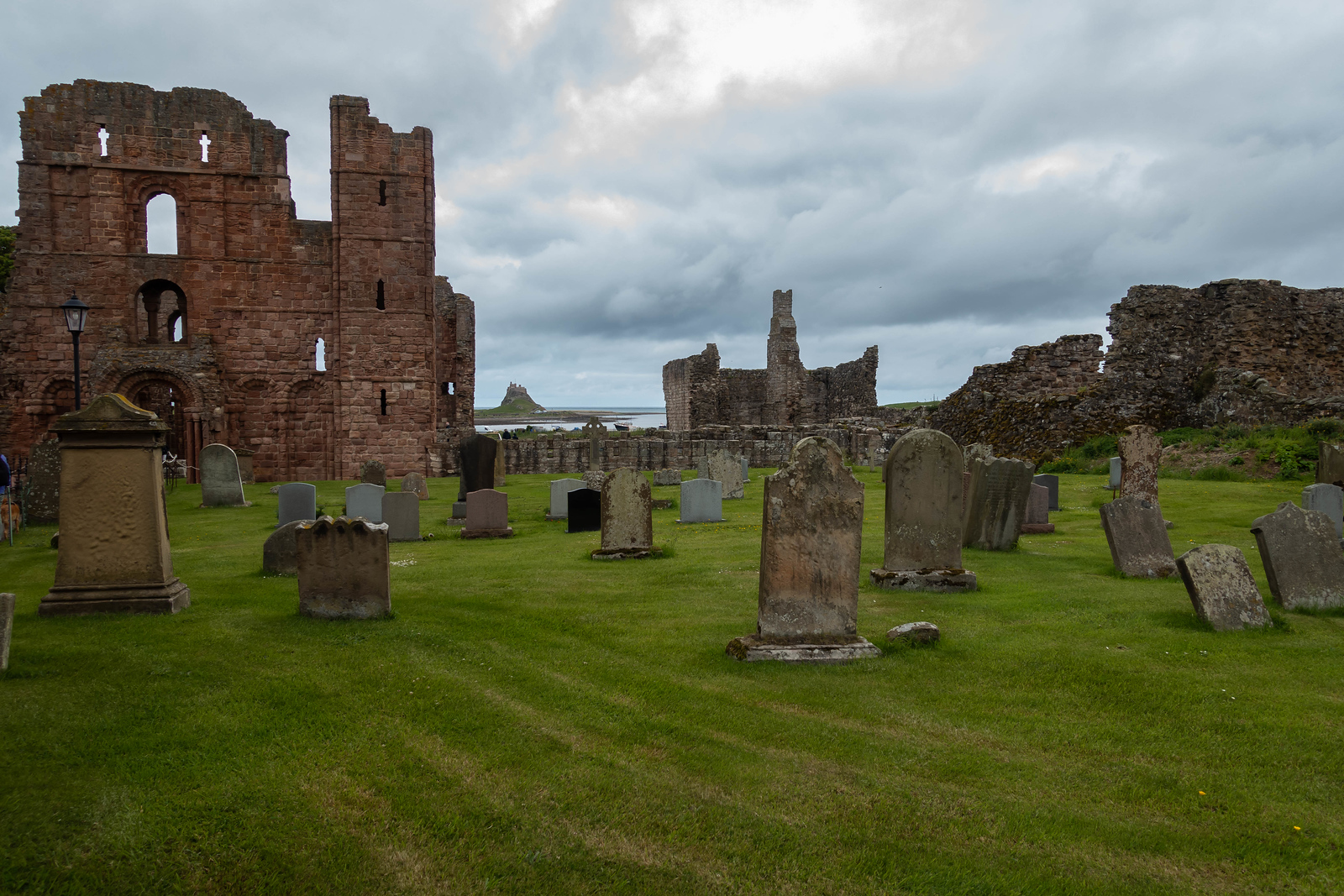 Lindisfarne Priory dates way back to the year of 635 and is known for being the thriving base of early Christianity in northern England. To this day it is still the main destination of pilgrimage in Northumberland due to its religious ties and peaceful surroundings.

Although you only get to walk through the 12th-century ruins of the priory, you still get to see the “Rainbow Arch,” the original structure that survived even though the main building has long since collapsed.

Miracles have been reported on the tidal island of Lindisfarne for hundreds of years. The first recorded instances being attributed to St. Cuthbert, a monk, bishop and hermit who died on the island in 687.

Eleven years after his death, when monks recovered his body from his tomb, the corpse was found intact and so the cult was founded to rever him as a saint.

This was also around the time when the Lindisfarne Gospels, the most important and impressive manuscript to survive from Anglo-Saxon England, were born.

Lindisfarne is also known for being ravaged by the Vikings. The 8th of June 793 is remembered as the first Viking raid on Lindisfarne, a date that marks the beginning of the Viking Age for many historians.

Despite the continuous raids of the Northmen at Lindisfarne, the Christian community managed to survive. The Cult of St. Cuthbert became even stronger and helped to unite a divided country into Medieval times. 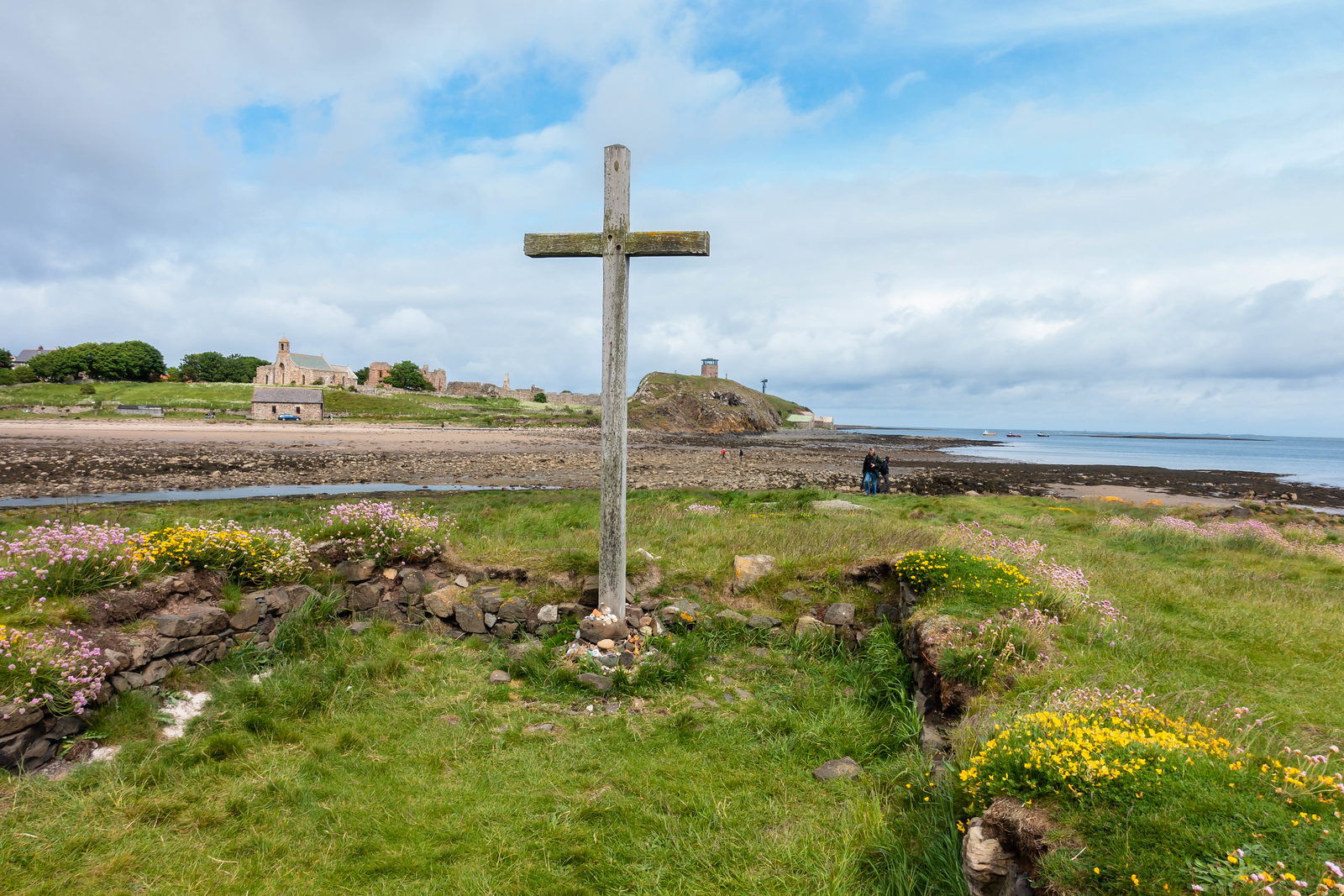 From the small graveyard next to the Lindisfarne Priory, you can catch a sight of St. Cuthbert’s Isle. When the tide is out, you can walk across the rocks and enjoy the views of the sea and the Lindisfarne shores from afar.

When St. Cuthbert first arrived at the Holy Island (Lindisfarne) and joined the priory, he lived on this isle as a hermit. The reason being was that as a monk, he wished to practice the Roman Catholic way of life rather than adhere to the Irish practices.

Even though he was later made the bishop of Lindisfarne by the King, his reputation proceeded him as a healer instead.

Travelling around the UK? Save your money by buying the English Heritage: Attractions Pass for Overseas Visitors in advance and enjoy free entry to over 100 English Heritage sites including Stonehenge, Dover Castle, Hadrian’s Wall, and more.

After you wandered through the rocks, head for the 360-degree observation tower. The hilltop where the lookout tower is placed provides a lovely view of the Lindisfarne Priory from the above.

Inside the lookout tower, climb to the top and enjoy panoramic views of the Northumberland coast and the castle. There are some helpful information boards to help you locate stuff on the horizon.

Observe the Nature at Rocket Field

The Holy Island (Lindisfarne) is a Natural Nature Reserve and home to some rather unique flora and fauna. The newly built Rocket Field building is a great place from which to observe the island’s wildlife.

It’s located on the main road towards the castle. The cleverly designed building accommodates both, the birds and the observers. Inside the building, there’s a large observation window with the views out onto the Rocket field while the roof has many eaves for the birds to nest.

Visible from almost everywhere on the Holy Island, the Lindisfarne castle, which is not really a castle, sits atop a rocky bump just a few miles off the Northumberland coast.

It was built in 1550 to protect the harbour from the invasion of Scots and Vikings. According to the islanders, the ghost of St. Cuthbert hunts the castle during the full moon when the tide is high. Spooky.

There’s not only the majestic view of the castle but, also the walk leading up to the fortress is very enjoyable. When the sea is out, the fishing boats sit patiently in the pebbled harbour and the whole site looks somewhat mystical.

As you approach the castle and start seeing the details up close, you’ll notice that it doesn’t look as old as its founding date. That’s because, in 1901, the castle was purchased by Mr Edward Hudson, the owner of the widely regarded Country Life magazine. And, following his vision, it was converted into a luxury holiday home by the architect Sir Edwin Lutyens.

Today, the site is looked after by the National Trust. There’s an exhibition in the castle that tells unheard stories and showcases memories of the Islanders and what the Lindisfarne castle was like before it got redesigned.

On the slopes of the Lindisfarne castle, you’ll find a lovely surprise – a brightly coloured flower garden. It was designed by Gertrude Jekyll, artists and plantswoman, in 1906 as a summer entertainment for Edward Hudson’s guests.

Take a seat on one of the benches in the garden and enjoy the views of Lindisfarne Castle in the distance. Even on a windy and rainy day the garden bursts with colour. 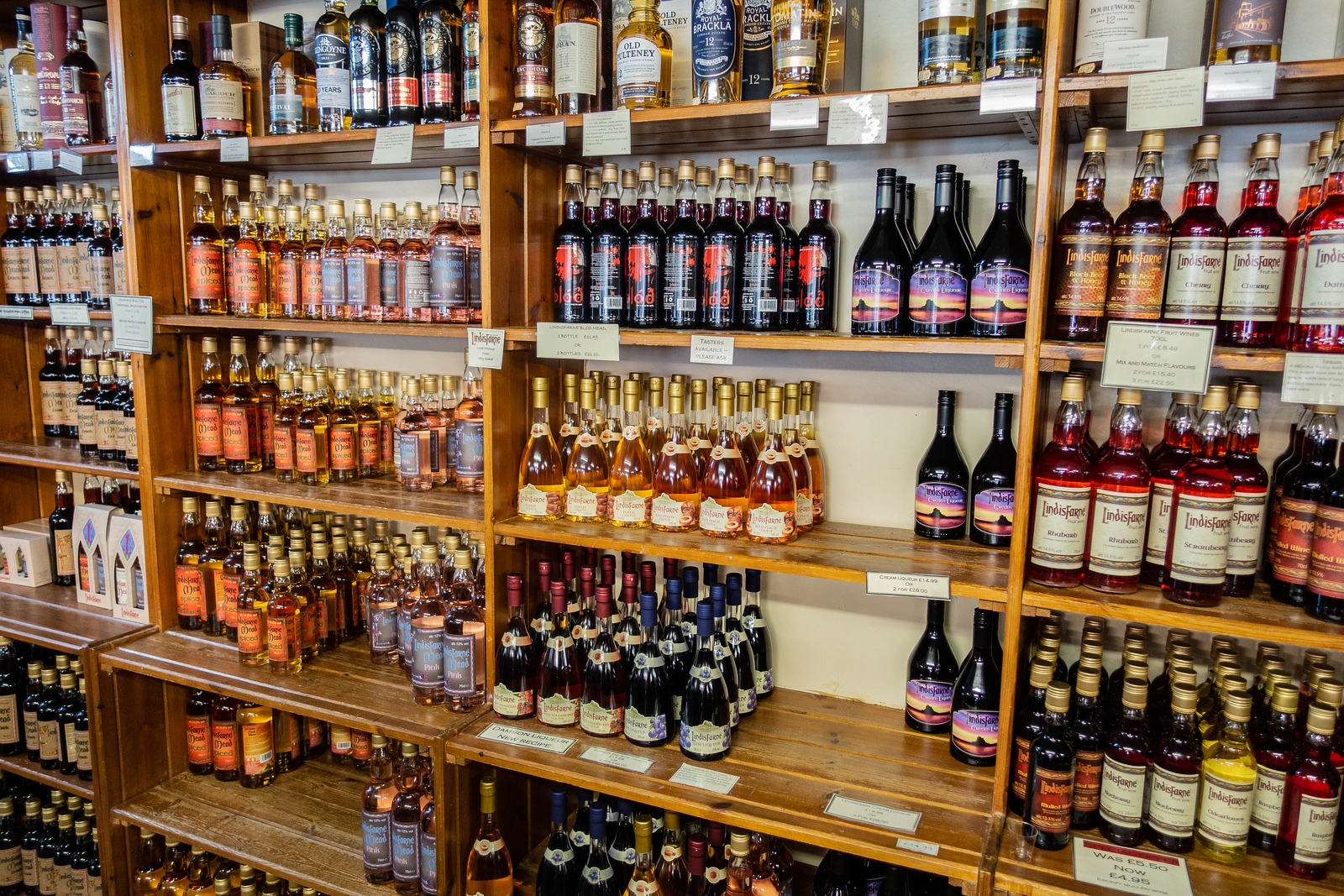 After (or before) the visit to the castle, pop into St Aidan’s Winery and taste the locally brewed mead. The shelves here are stacked full of Lindisfern mead, wine, gin, liqueur, and rum to purchase.

But before you grab a bottle, be sure to taste one (or all) of the famous Lindisfarne meads: the original, blood orange, spiced, and pink, the newest addition to the mead collection.

The taste is subtle, but don’t get fooled by the mellowness of this “nectar of the gods.” It’s an alcoholic fortified wine, manufactured on the island from local pure water, honey, and herbs. So be mindful if you’re driving.

The tasting station is on the left as you enter the shop, enjoy!

If you happen to be in Holy Island when it’s raining, pop into Lindisfarne Heritage Centre. Here you can enjoy the various exhibitions about the Vikings and the Islanders whilst staying dry and warm.

Here you’ll also see an interactive replica of the Lindisfarne Gospels. The original copy of the manuscript is now stored in the British Library, check it out for free if you are planning a trip to London.

Getting to Holy Island

Getting to Holy Island is easy. The nearest train station is in Berwick-upon-Tweed, a cute place and the last town in England before crossing north into Scotland. From the train station here, you can get a regular local bus (in the summer months) or a taxi.

The tide on Lindisfarne comes in twice a day so, be sure to check the timings before planning your trip to Holy Island. If you are planning a day trip, you probably want to get there early in the morning if possible to beat the crowds.

You can check the tidal timings here.

Have you been to Holy Island? How long did you stay? Let us know in the comments below… 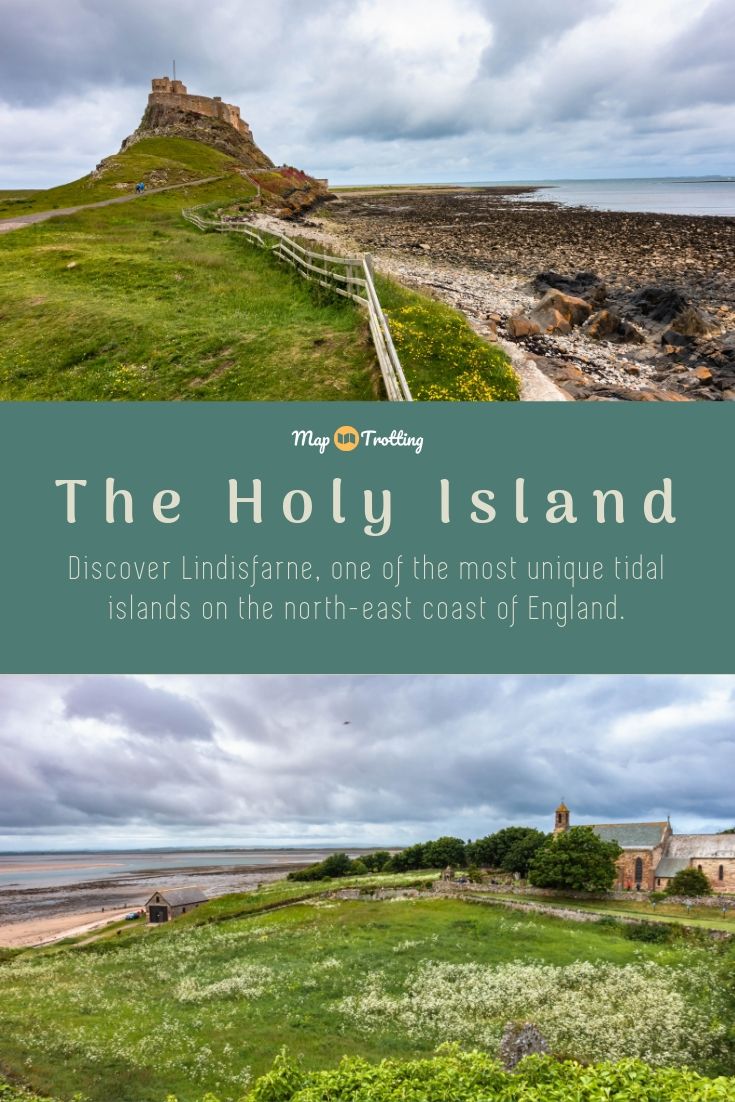 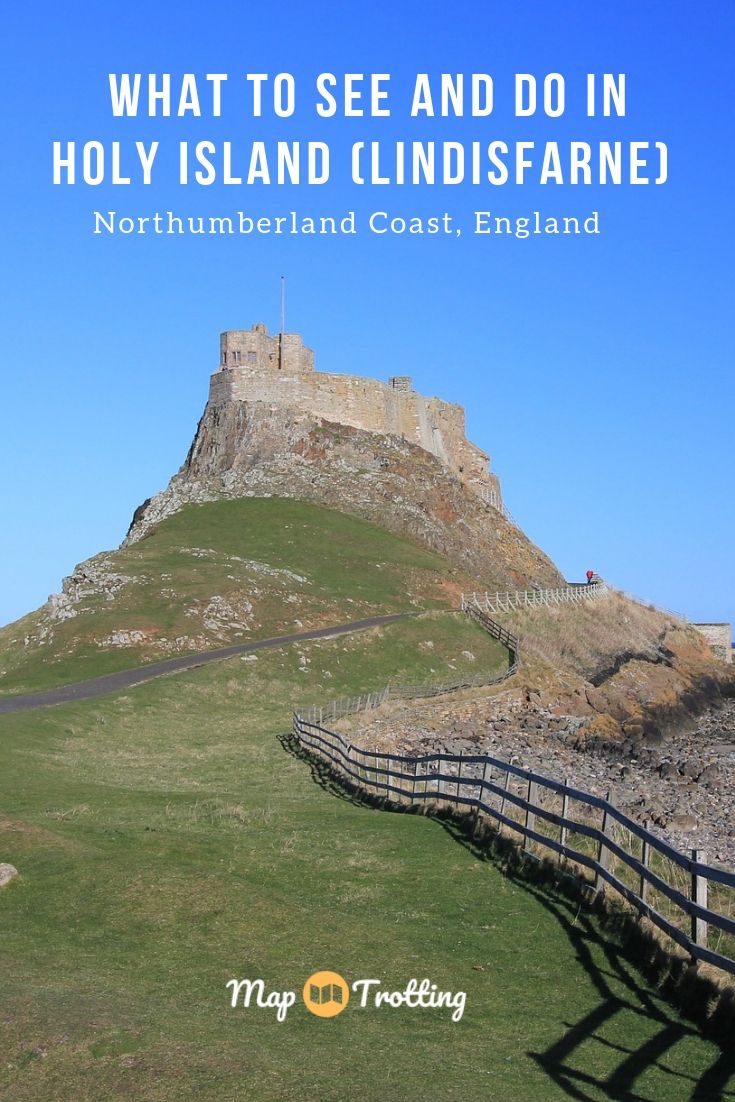