How to Travel from Chiang Rai to Laos [Huay Xai]

It is easy to cross the Thailand border from Chiang Rai to Laos or vice versa in the far north of either country. We have just completed this border crossing after staying in Chiang Rai for a few nights and thought we would share the details for anyone looking to take the same route.

Overall it was hassle-free to cross but it is good to know what to expect and the fees involved.

From the provincial bus station in the centre of town take the bus heading to Chiang Khong. It will be the red bus and will leave every hour, on the hour between 6am and 5pm. At the time of writing the bus station was being rebuilt so the stops may move but if you ask around someone will point you in the right direction.
  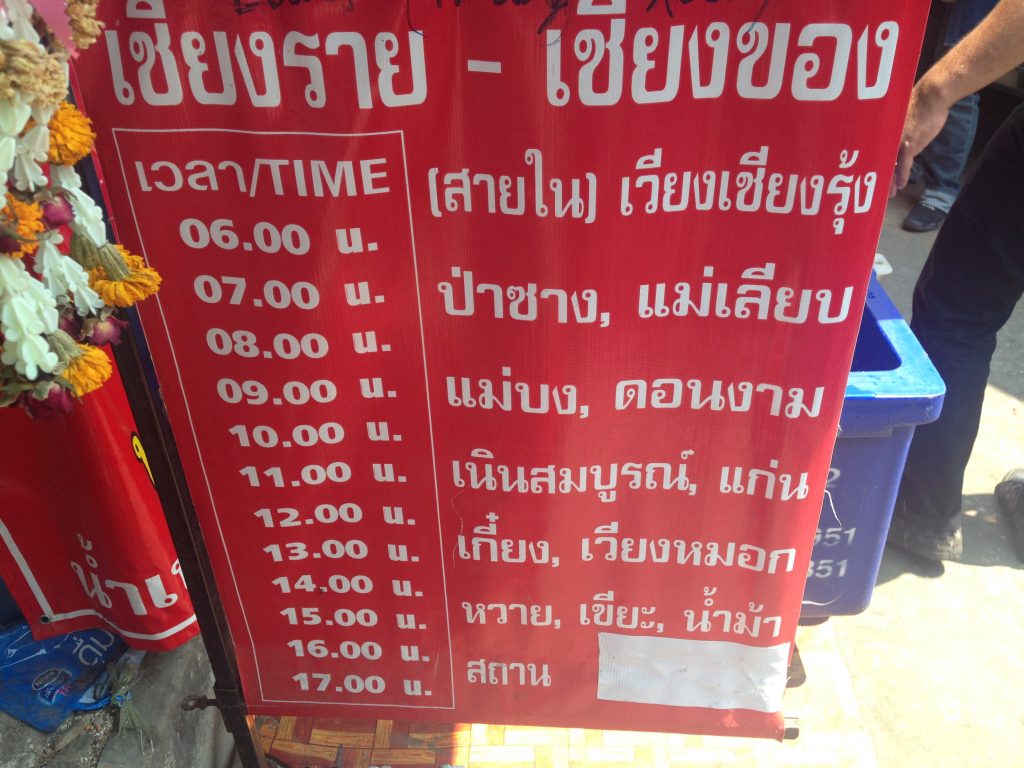 The journey takes around 2 hours and costs 65 THB per person, you pay the attendant onboard so just hop on and pick a good seat. This is a local bus so no aircon, just open windows, and doors to cool you down but we found it comfortable even in the baking early afternoon sun. The real selling point seems to be a straight road but I’m not sure there’s any other way to go! 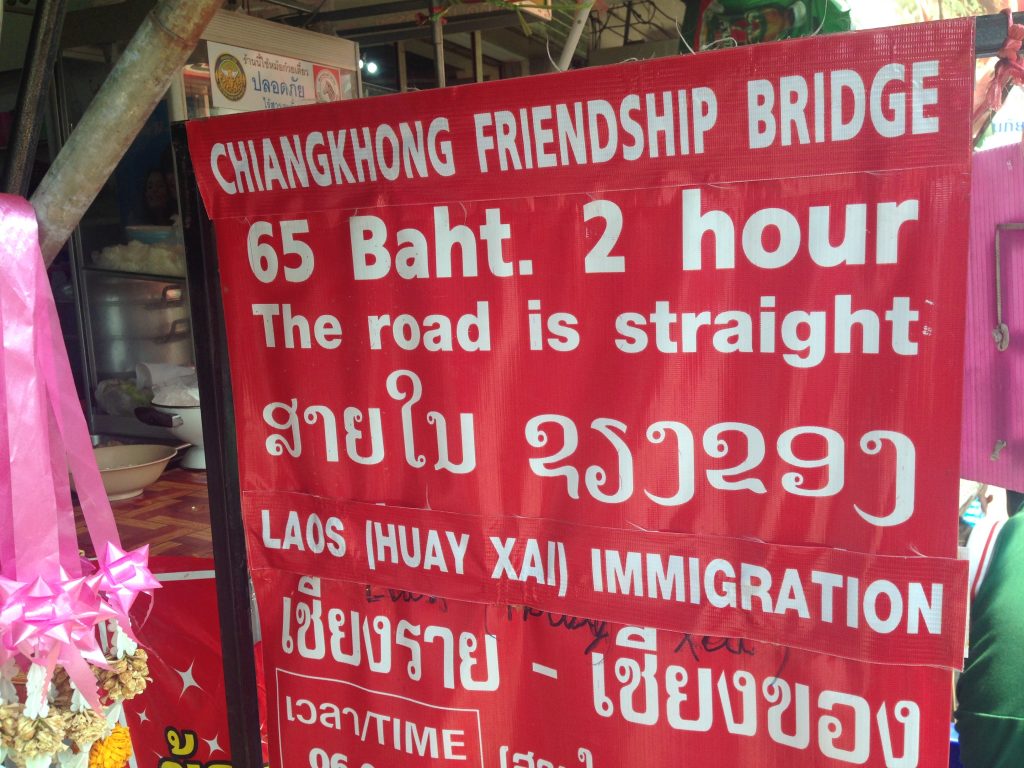 Tell the driver or attendant that you want to go to the Laos border. This way they will drop you off by the roadside a few km before Chiang Khong and you can take a Tuk-tuk from here the few km to the Thai border. If you miss this stop and end up in the town you can get a Tuk-tuk from there for a few THB more.

At the roadside, the Tuk-tuk drivers had a sign stating the prices. 60 THB for 1 person and 50 THB each for 2 or more people. I saw a couple of guys trying to haggle but these prices seem pretty fixed, you could always try hitching a lift as the road only goes down to the border.

TOP TIP: Use the superb 12GoAsia for your transport booking across Southeast Asia to save time and get the best deal. Search for tickets here…

Crossing the Border from Chiang Rai to Laos

Arriving at the border on the Thai side building we presented our passports with departure cards and got stamped out of Thailand.

Next, we needed to get a ticket for the bus to cross the friendship bridge, this is a mandatory 20 THB per person.

The lady selling the bus tickets also offers to exchange your TBH into USD as it is generally cheaper to pay for a Laos visa in Dollars. I calculated that we saved around $5 to $10 each by doing this so it’s good to carry some spare Dollars.

There’s a sign stating that you cannot cycle or walk across the bridge so it’s a road bridge only. Ironically there was a large group of cyclists crossing at the time and their bikes had to be wedged in between the bus seats when they could have just peddled over. 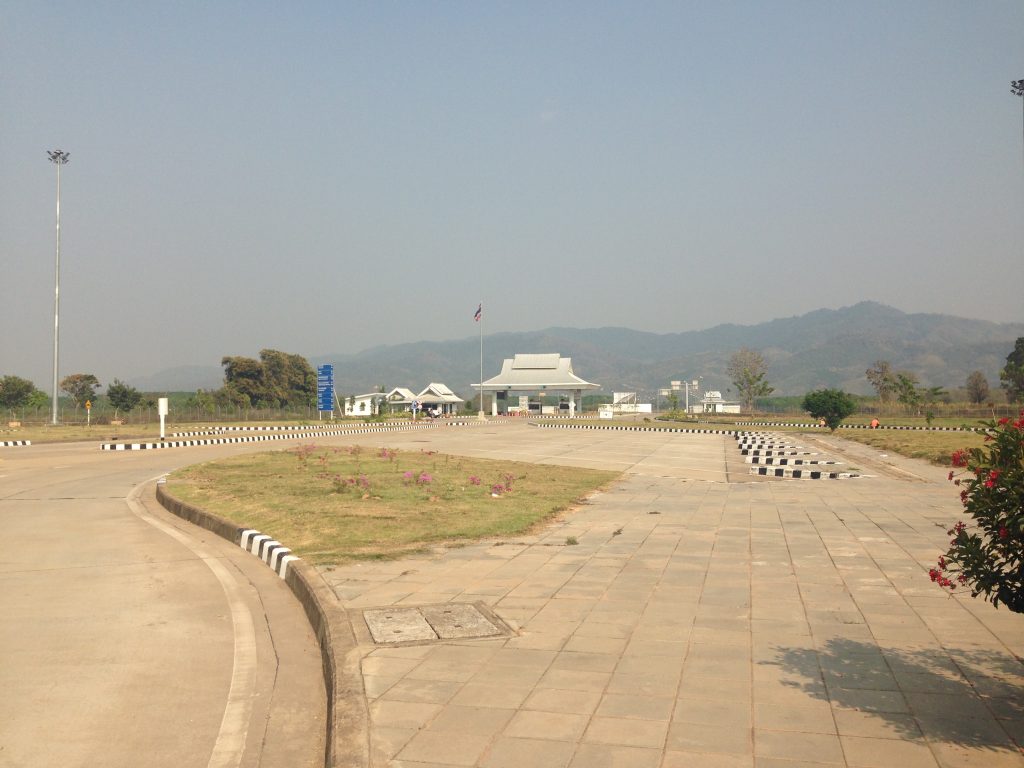 Personally, I found this a bit of a shame as I think there’s something quite epic about walking out of one country and into the next, but I also didn’t want to get arrested.

I’m not sure what timetable the buses run on but it left after we waited for around 10 minutes. The journey took about 3 minutes across the bridge to the building on the Laos side.

At the Laos Border

Next, we went to the Visa on Arrival window and got the necessary paperwork to fill in. There is a visa form and an arrival and departure card to fill out. You need to give a passport photo with the form or pay a little extra.

You hand all this into the person at the right-hand window and line up to get your passport back at the left window once they have processed your visa. At the left window you also pay the visa fee. Kristina paid $30 as I’m not sure they knew where Lithuania was, we just kept smiling and saying ‘EU’ ‘EU’, and I had to stump up $35 as some kind of weird $5 being British tax!

We did however avoid the lovely ‘overtime fee’ of an extra $1 which gets levied on you if crossing the border from Chiang Rai to Laos after 4pm or at the weekend. We got our visas at 3.52pm on a Wednesday, we know how to play the system!

It all went very smoothly though and with our Laos visas stuck in our passports, we walked through to the passport control booth. The chap here was more interested in playing Clash of the Clans on his phone than inspecting my shiny new visa and just waved me through. 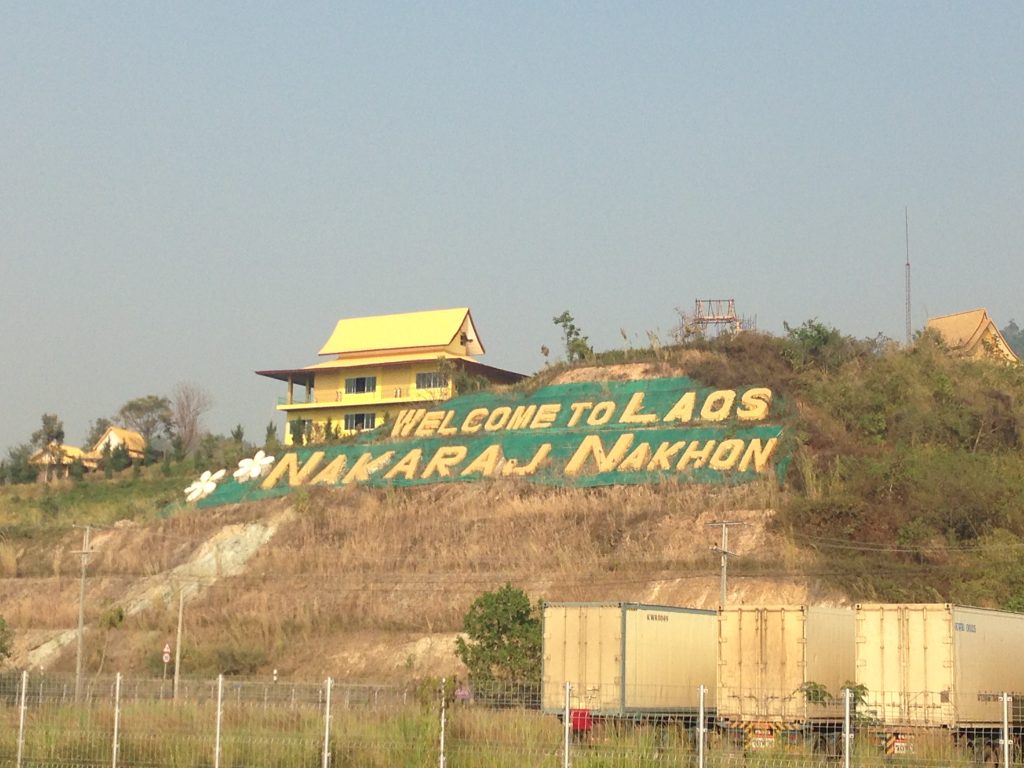 So that’s our journey from Chiang Rai to Laos, and there was a big sign to prove it!

Getting to Huay Xai from the Border

A couple of chaps did walk off but no lower price was offered as a result and it was a 15 minute ride to the centre of Huay Xai in the heat.

We had to wait about 20 minutes for some more people to come through before they would leave as the previous Tuk tuk was full but we were in no hurry and just relaxed in the shade.

Tips for the Chiang Rai to Laos Border Crossing 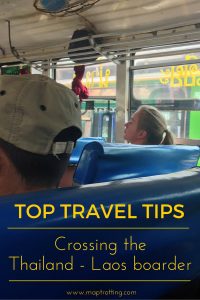