After exploring Malta for a couple of days, it was time to head south on the bus to Marsaxlokk Fish Market. It’s a small fishing town built around a harbour and is home to a famous fish market on Sundays.

We took the 206 bus from the University of Malta, south-east across the island. The journey took just under an hour and cost €2 per person. You can also take the 81 or 85 from Valletta to get there.

The bus drops you on the main road and it’s just a 2-minute walk down to the harbourside where the market is located.

We headed towards the square in front of the local church to get our bearings and soak up the buzz of this busy little town on a Sunday morning.

The market does dominate the harbour front but you can still cut a path along the water’s edge. Here you’ll again see lots of little fishing boats used to bring the fresh catches to the market.

These are known locally as Luzzu and usually painted in bright colours with a pair of eyes to the front. It’s an ancient custom said to protect the fishermen at sea.

Marsaxlokk market takes place daily but on a Sunday expands further to take over the whole harbour front.

Although known as a fish market on Sundays the fish stalls only make up a small proportion of the stuff on offer. As we walked the full length of the harbour we saw everything from clothing to CDs and from pastries to curtains.

Although there were some interesting stalls and a fair mix of locals milling around, unfortunately, the overall vibe seemed to be people selling cheap tat at not so cheap prices. 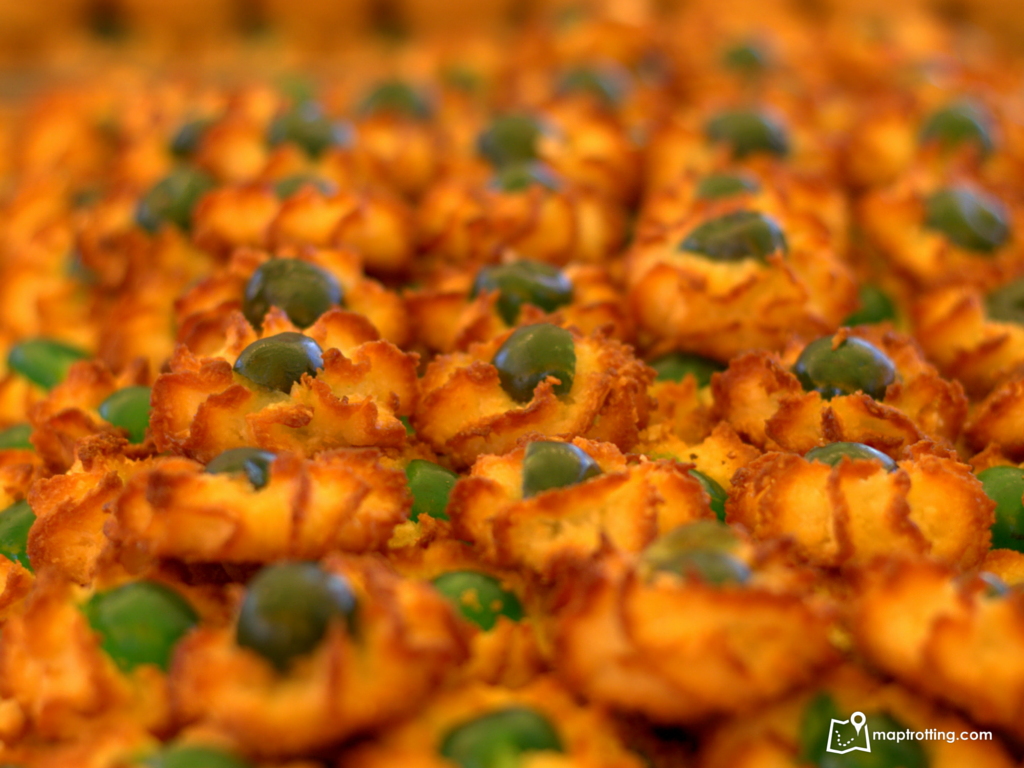 We did plum for a couple of cakes soon after we arrived as there were some locally baked offerings on a few of the stalls.

At €1 per item, they seemed a little overpriced compared to the local bakers but Pastini (pictured above) is a local speciality and were delicious. 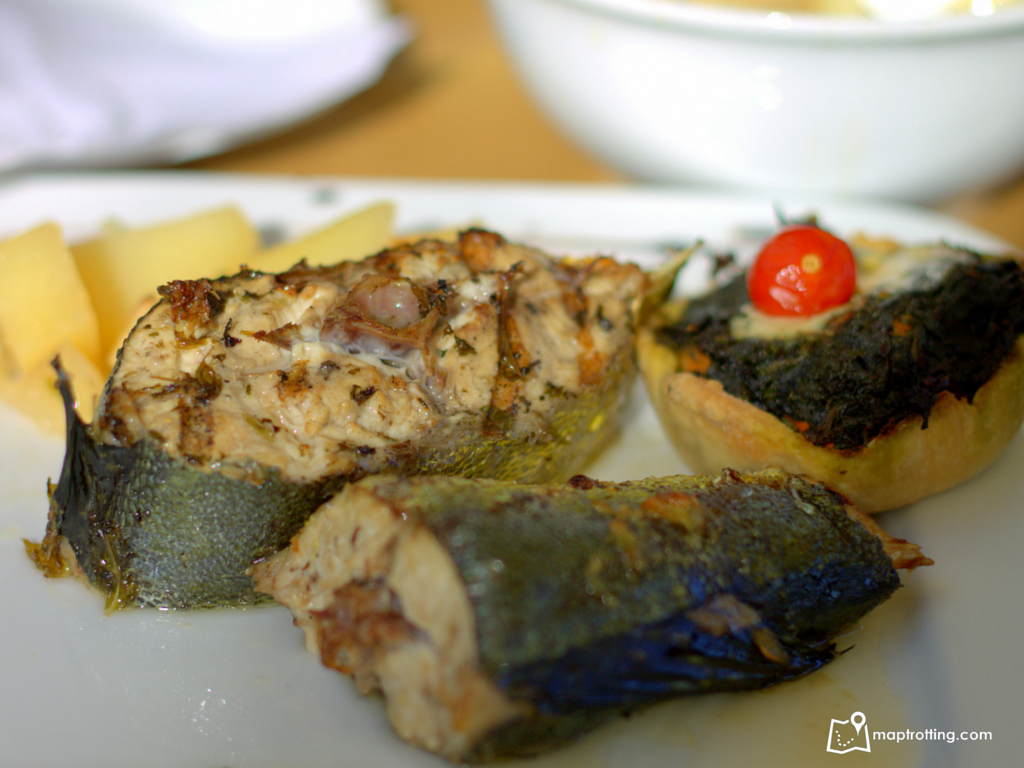 After sniffing around the market for a while we were getting a bit peckish and decided to seek out a table at one of the many busy harbourside restaurants for a spot of lunch. Faced with the usual traveller dilemma of not knowing which one was any good we randomly chose one halfway along the seafront.

Whilst waiting for our main course the waiter brought along some bread, crackers and a Maltese hummus. It was very welcome as our hunger had truly set in by this point.

For the main dish, we both opted for the catch of the day, Lampuki (above). This fish is caught in the waters around Malta in its permitted season from the 15th August to the end of December as it migrates past the island. You might know it better as Dorado or Mahi-mahi.

It was a very meaty fish with a texture not too dissimilar to chicken I thought and came served with potatoes and fresh local vegetables.

It was good value at around €10 each and just what we needed to keep us going. It’s just a shame that the market stalls block the view of the picturesque harbour beyond.

If you are looking for top quality food experience in Malta, try the fish restaurant Tartarun. It’s one of Marsaxlokk’s most highly-rated seafood restaurants. 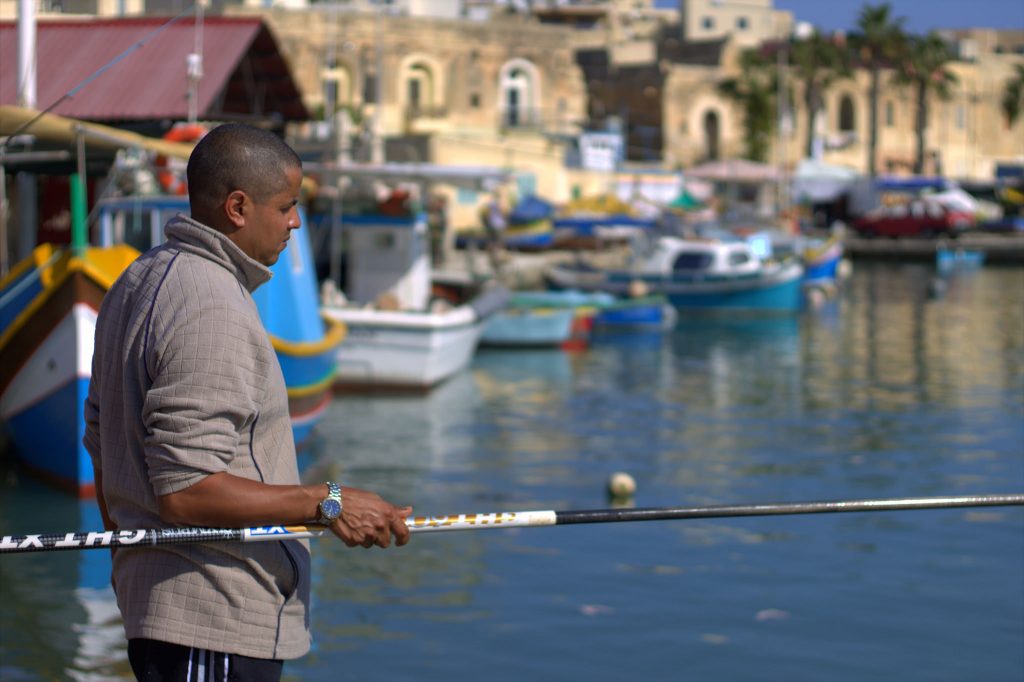 It’s a nice enough harbour full of colourful fishing boats but the market, sadly, blocks the view from any of the restaurants and it can be really crowded in places.

However, we still had a nice day out and would come back here on a weekday instead, to avoid the crowds.

If you are after a hassle-free full day sightseeing tour including the famous Sunday Market in Malta, you have a few easy and convenient options:

Or click one of the widgets below to check out what’s included in the tours and to reserve a spot at no extra cost to you:

The Sunday market is open early in the morning until around 13:30. If you are after fresh produce, visit the market as early as possible along with the locals as the best bits sell out pretty fast.

Early Sunday morning is also the time to see the fisherman pulling the catch of day out of the Mediterranean sea and bringing it to the stalls. A great attraction!

When does Marsaxlokk Market open?

Marsaxlokk Market is officially open every day throughout the year. However, the main tourist market is only on Sundays. The official hours are 8:30 AM until 2:00 PM but may be shorter in the low season.

Is there anywhere to eat in Marsaxlokk?

The shorefront is full of restaurants, most of which sell a fresh catch of the day. It's best to book ahead in the high season as it gets pretty crowded.

Yes. It can get very crowded in the high season. To appreciate the village in peace consider going there on a different day to Sunday.

How do I get to Marsaxlokk Market?

You can catch the 81 or 85 bus from Valletta. It's easier and quicker to use a local taxi company like e-cabs if don't have your own transport.

Have you been to Marsaxlokk Fish Market? What did you think about it? Relaxing destination or crowded tourist hotspot? Let us know in the comments below… 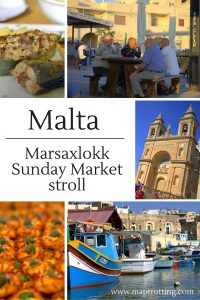