Brilliant Things to Do in Taormina in Sicily, Italy

Clinging to the northeast coast of Scilly, you’ll find the funky little town of Taormina. The town and surrounding area are home to a fair few unique places which make it well worth exploring on your next Sicilian adventure.

Here’s our rundown of the top things to do in Taormina including sights, sounds and tastes + cool things to see in the Messina district of Sicily.

It’s Easy to Get to Taormina

Okay, it’s a weird one to start with, but Taormina is very easy to get to making it ideal for a relaxing weekend break. With Catania Airport a short distance along the coast it’s easy to fly to this side of Scilly from many other European countries.

Catania airport is around one-hour drive away along the smooth E45 toll road if you grab a hire car. Otherwise, there are direct coach transfers costing around €8 each way which takes 1.5 hours.

If you’re a train nerd like Charlie, then consider taking the AMT Alibus to the train station in Catania and then the train along the scenic coastal line. You might need a taxi or bus to get from Taormina-Giardini station into the town.

Another option to help you get around would be to hire a car in Scilly from one of the two big airports on the island.

However you get there, Taormina is very well connected by road, rail, and air.

Coming over from the relatively flat Mediterranean island of Malta we were instantly stunned by the sight of a snow-capped Mount Etna as we exited the airport terminal. We’d almost forgotten what hills and mountains look like.

Taormina itself has no less impressive surroundings with the town centre being high above the dramatic coastline and beaches. This means there are oh so many great little vantage points to take some dramatic photos around the town with some equally stunning coastal areas there for exploration.

Because of the split-level arrangement of Taormina on the hillside, there are some rather steep roads and plenty of steps to deal with. Thankfully some genius thought of constructing a cable car up into the town from down on the coast road.

This makes it super easy and entertaining to get from the hotels, restaurants, and beaches on the coastline up to the gate of the main town. Riding on the ‘Funivia’ will cost you a rather steep (sorry) €3 per person one way but will save a lot of legwork.

The cableway runs from 8am to 8pm in the winter and until 1am in the peak summer season. If you stay out for another beer and miss the last ride down there is an easy path to follow back to the coast road but you’ll need a torch in places once it’s dark.

The Ancient Theatre of Taormina

One of the town’s main attractions is the impressive “Teatro Antico di Taormina”, Greek theatre which was built in the 3rd Century BCE. This is the second-largest ancient theatre on the island of Sicily, one of the best-preserved by far and well worth a visit.

It’s quite a magical experience to sit on the back row of seats, gazing down across the entire theatre and through the columns to see the waves crashing against the coastline. The theatre is still used regularly for performances and festivals today.

It costs €10 per adult to enter the complex and there’s an audio guide available for an extra €5. Closing time varies between 4pm and 7pm depending on the time of year. 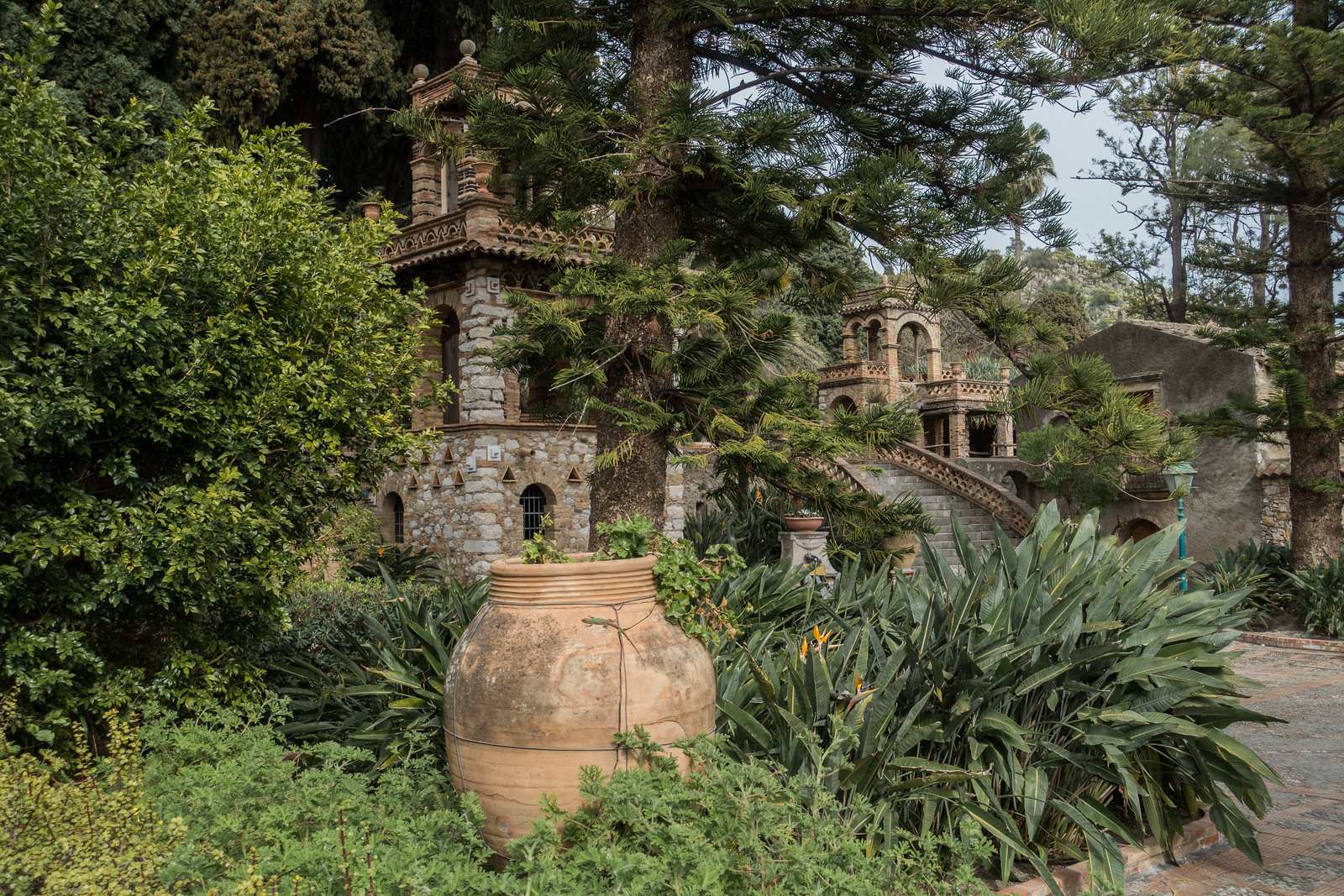 This lovely public park is just one of the parcels of land originally purchased by Florence Trevelyan. She was a close relative of Queen Victoria and become involved in a forbidden affair with the future English King Edward VII. After being exiled from England she took a two-year tour of Europe before settling in Taormina in 1884.

She married local doctor Salvatore Cacciola and began to build several ‘Victorian follies’ out of salvaged materials, which still survive in the park to this day. It gives the place an unusual mix of English country garden with a local flavour.

The grounds of her villa were given to the town in 1922 and are now open to the public as a quiet place to chill out in the Mediterranean heat and take in the stunning views along the coast from on high. 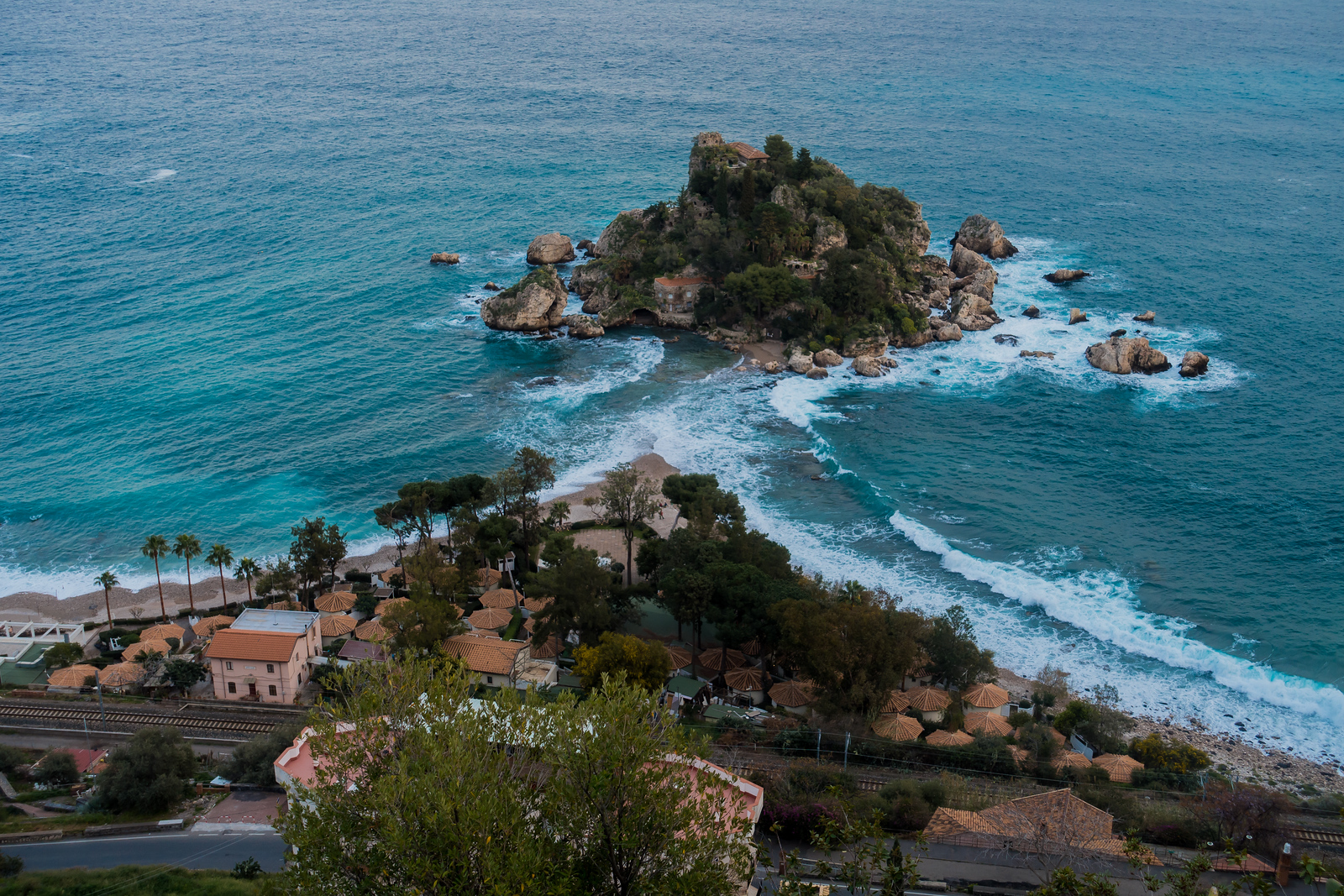 Another of Florence Trevelyan’s purchases was the tiny island, Isola Bella (Ìsula Bedda), known locally as the Pearl of the Ionian Sea. Florence built a house on top of the rocks facing out towards the sea as a peaceful hideout. Since 1990 it has been owned by the local authorities and is now maintained as a nature reserve.

You can walk over to the island when the tide is low and the sea is calm via the thin sandy ridge connecting it to the main beach. It’s well worth getting your feet wet for! 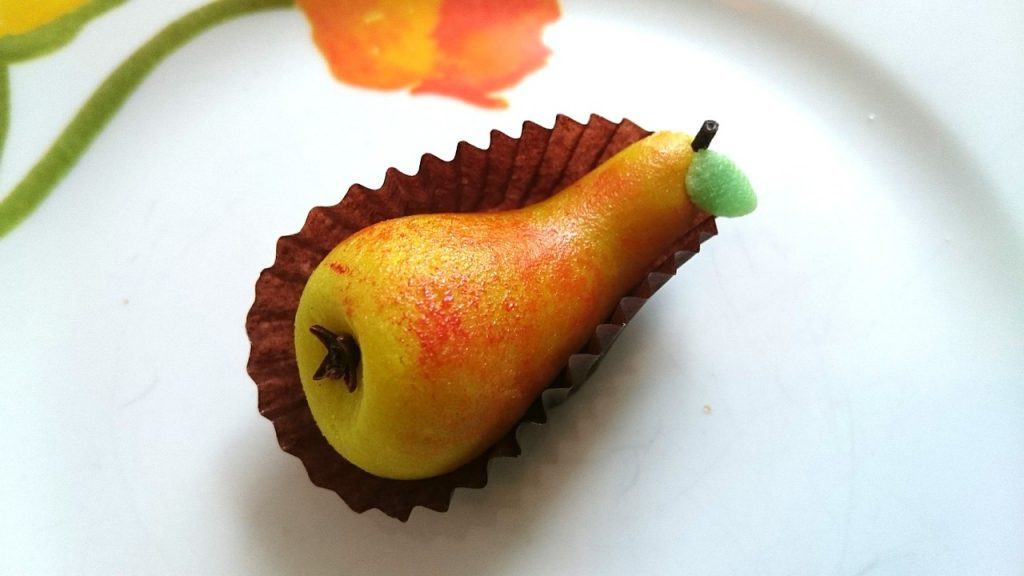 As you wander the streets and alleyways of Taormina you can’t help but see shop windows stacked high with mini fruits. Closer inspection tells you that they’re actually made from marzipan, being some of the “frutta di Martorana”, a local traditional treat.

The practice of moulding and painting marzipan to look like tiny bits of fruit was said to have originated from the nuns of the Martorana Monastery in Palermo, hence the name. They are traditionally placed by children’s bedsides on All Saints Day (1st November) as a gift from their deceased relatives. 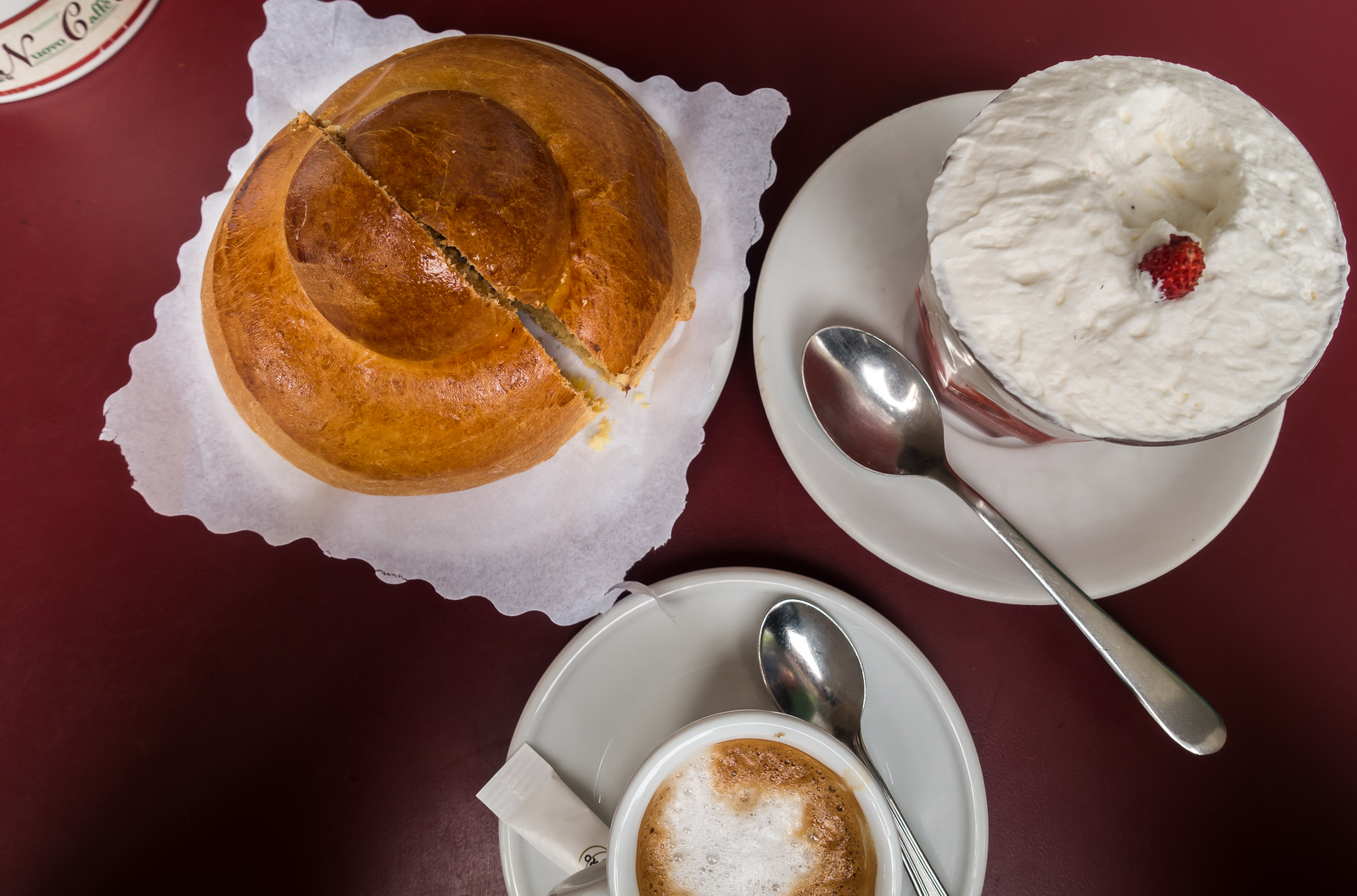 Another treat for any sweet-toothed visitors to Taormina is the Granita. Originating from Sicily, these creamy dishes are enjoyed all over Italy in differing forms. It’s said that those served on the east coast of Scilly are much smoother than elsewhere, being the consistency of a good sorbet.

Available in a variety of flavours, you’ll see locals and tourists enjoying them alongside a coffee. They’re usually served up with a hefty brioche bun on the side which is perfect for dipping into your cup of creamy goodness.

Try and find a spot just out of town to enjoy one though, we went to a random roadside cafe and paid about a third of the price of the central Taormina version!

Pretend to be Al Pacino in Savoca 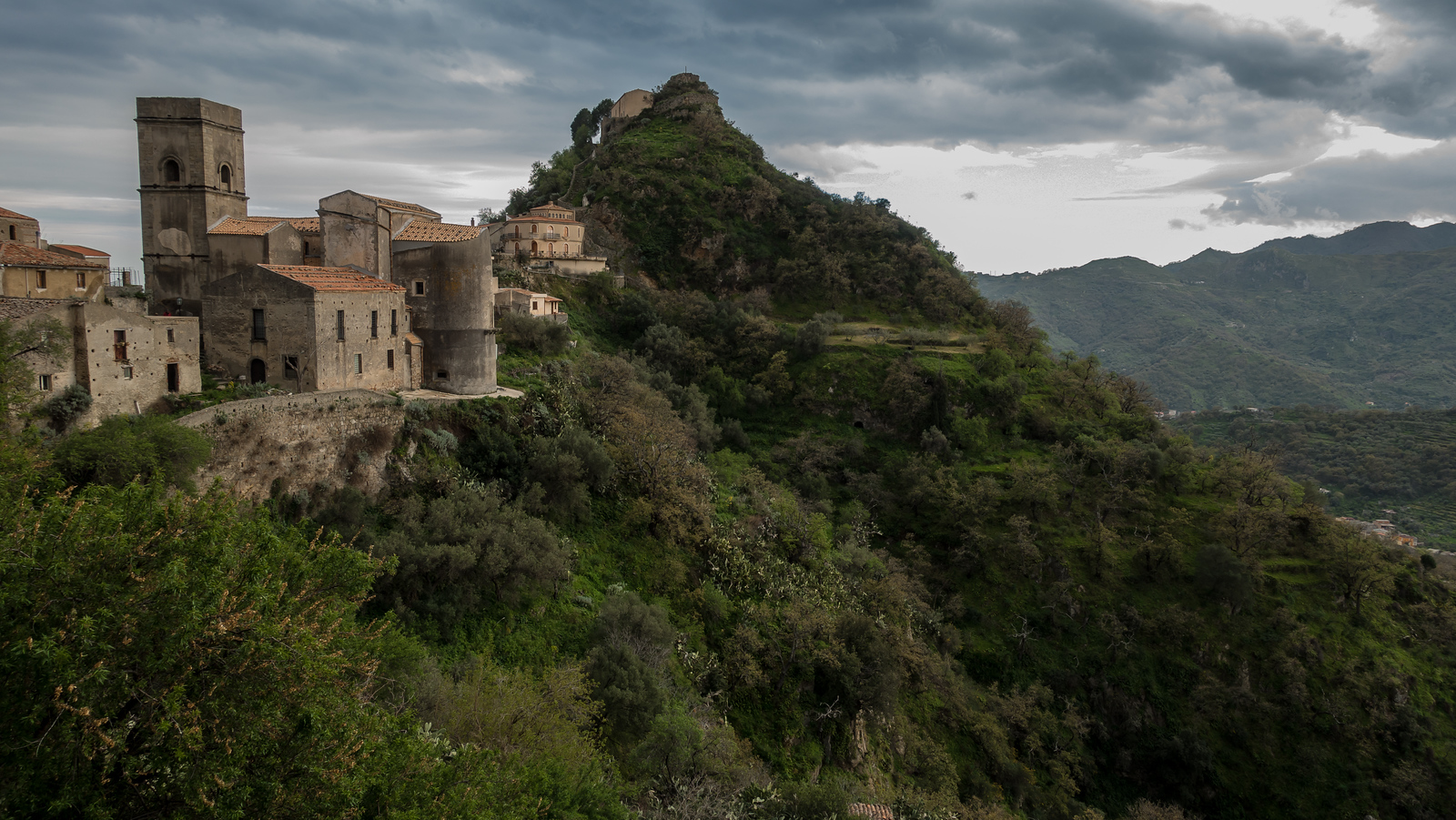 Hidden up in the mountains around 20 km from Taormina you’ll find the stunning little village of Savoca. The setting is well known to fans of the Godfather as the village where Michael Corleone, played by Al Pacino, meets and marries Apollonia Vitelli-Corleone.

You can pull up a chair outside Bar Vitelli in the exact spot where the future Don threatens the bar owner into marrying his daughter. Nice. Afterwards, take a stroll further up the hill and follow the signs around the fifteen-point heritage trail. It takes a fair bit of legwork but is totally worth it for the views.

Getting to Savoca is easy if you’ve got a hire car and like taking on a fair few hairpin bends.

Otherwise, ask at your accommodation as we heard about a few good Savoca excursions and services which can get you up to the village.

Where to Eat in Taormina

Being a major tourist hotspot is easy to get ripped off when it comes to dining out in Taormina. Just pausing for a second and glancing at one of the massive streetside menus will summon forth a charming local in a waistcoat to tell you just how great each of the twenty-nine pasta dishes tastes.

If you’re like us and prefer not to be hassled into eating somewhere then do some research first. It’s best to keep away from the main drag through the town centre, although we did enjoy a light salad and a beer in the chilled out Re di Bastoni Pub (Corso Umberfto, 120, 98039), highly recommend for minimal fuss.

For a full-on feed, we’d also suggest Trattoria Da Nino (Via Luigi Pirandello, 37a, 98039) which is nicely located close to the cable car terminal. The food was fresh, simple and delicious, we did seem to get a very basic service because we didn’t speak Italian but that’s fair enough.

One night we ate at our hotel as they offered a tempting two-course affair for €16 per person. It was a great spot to get some freshly prepared pasta and have a chat with the chef himself so don’t overlook the place you are staying if the vibe is good.

Read More about other lovely towns in Sicily.

Where to Stay in Taormina 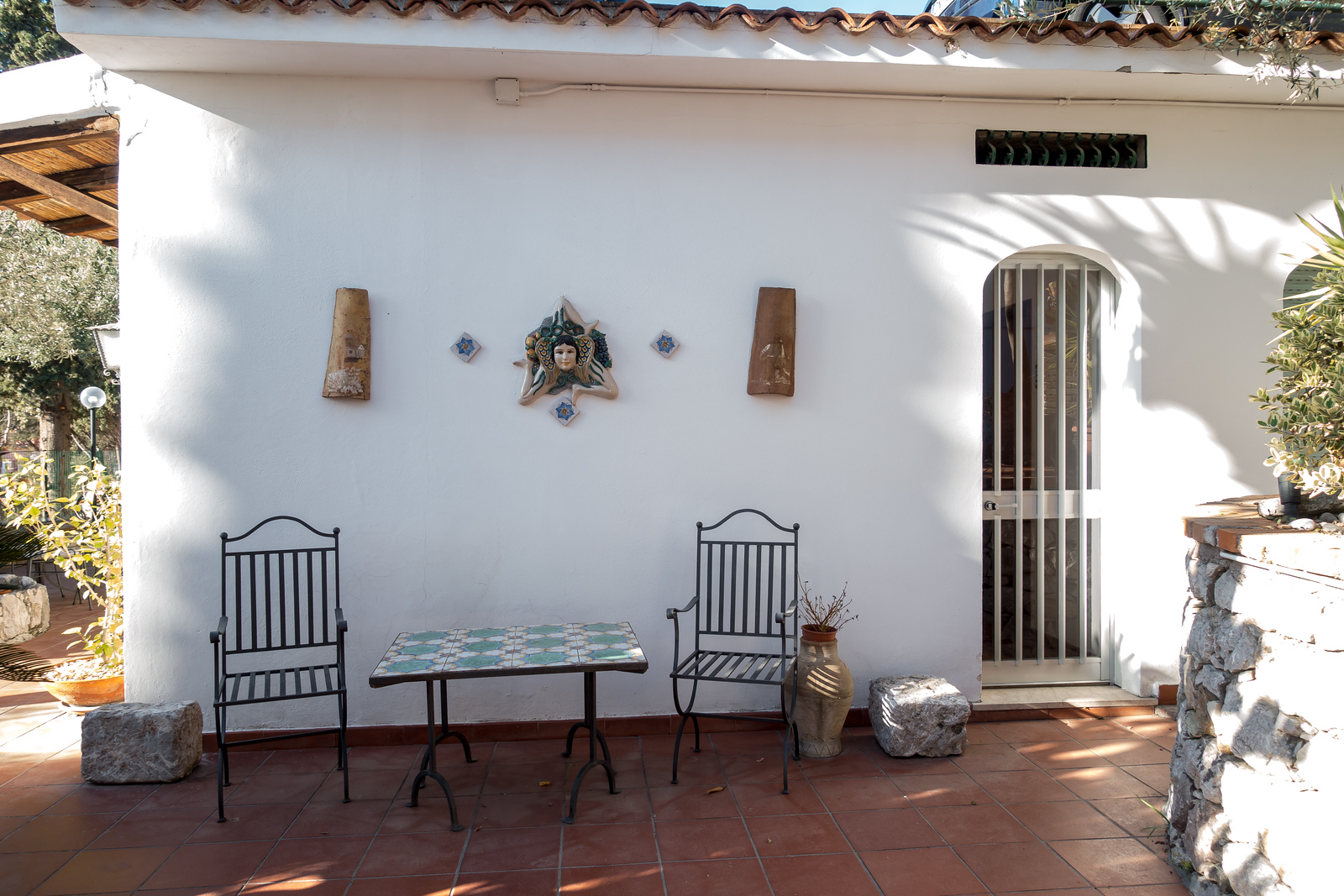 The first thing to work out is if you want to stay in the town itself or further down toward the coast area. There’s really no shortage of accommodation options all around Taormina, it really depends if you want the five-star luxury of somewhere with a more local vibe. Being parked on a hillside, many of the hotels will offer you a fantastic sea view but of course, you’ll always pay extra.

For two nights we stopped at the cosy Taormina Garden Hotel. It’s locally run, very friendly and offers a good breakfast and evening meal option. Being hidden below the level of the road meant that it was very quiet too, so that’s a plus in this busy seaside location.

Have you been to Taormina? What was your highlight? Let us know in the comments below… 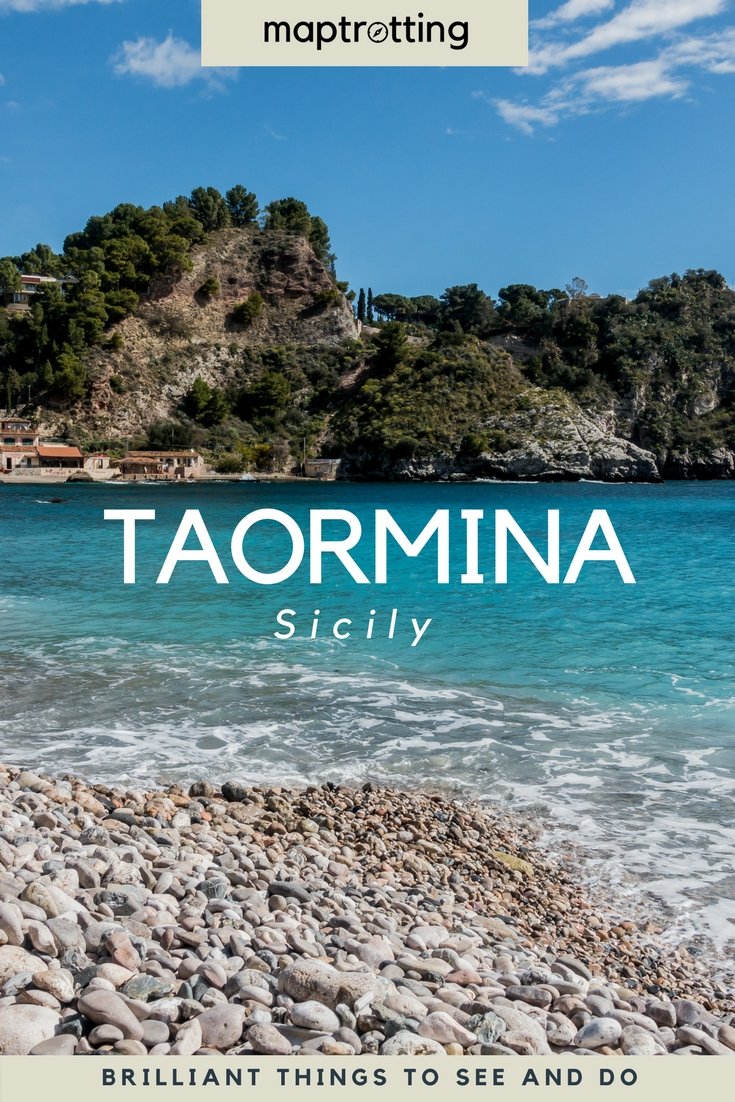