The Top 4 Beaches in Norfolk, England

So if you are in the county of Norfolk, make sure you head to the coast and check out these stunning beaches.

Nicknamed the ‘Las Vegas of the East Coast’, Great Yarmouth is home to the ’golden mile’, a stretch of pubs, cafes, restaurants, arcades and theme park rides along its extensive sea front.

At the central beach area there’s no chance of children getting board here with crazy golf, donkey rides, trampolines, boat rides and many other attractions all close by. 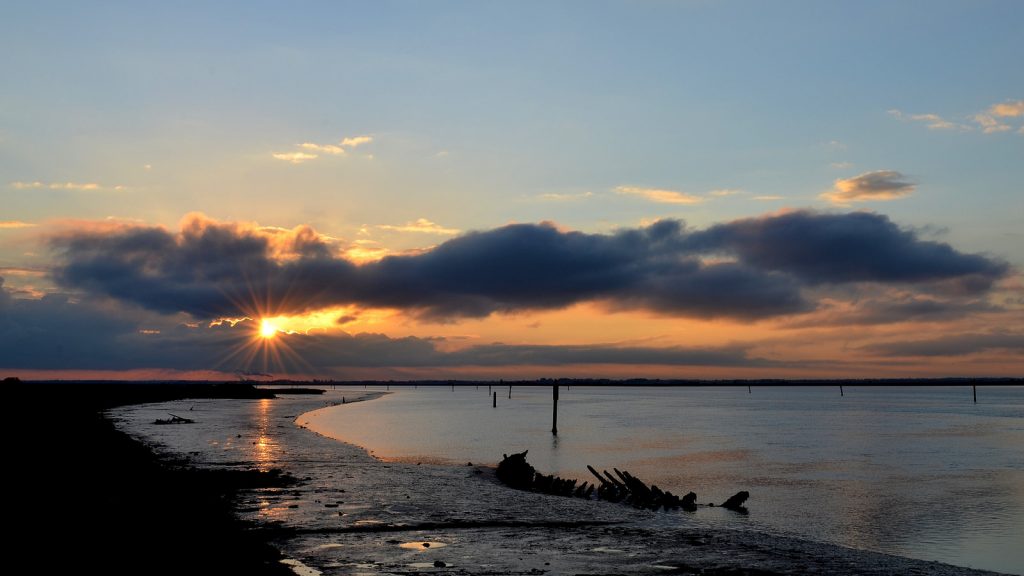 You’ll experience the true English seaside as people lounge around in deckchairs on the beach, only moving to go and find some fresh local fish and chips or an ice cream.

Make sure you don’t miss the following on your visit to Great Yarmouth:

Enjoy a walk on the Britannia Pier which proudly extends out into the North Sea. There are amusements, rides and even a theatre to enjoy as the waves crash below.

Take a boat trip out to see the Seals at Scroby Sands, these leave from the Central Beach alongside Britannia Pier.

Feel like a giant at the wonderful Merrivale Model Village, it even lights up at dusk.

Have the ride of your life at the thrilling Pleasure Beach at the southern end of Marine Parade.

Wells-next-the-Sea is a quaint town with a huge expanse of sand about 1 mile away. This makes it a pretty unique place with two charming attractions in one.

When visiting Wells-next-the-Sea, firstly you can explore the town with its busy little harbour packed full of colourful fishing boats.

If you get hungry there’s some great fresh Fish and Chips from the award-winning French’s Fish Shop on the harbour front. Grab yourself a portion and then sit on the harbour wall to watch the tide flow in and out as you fill your stomach. 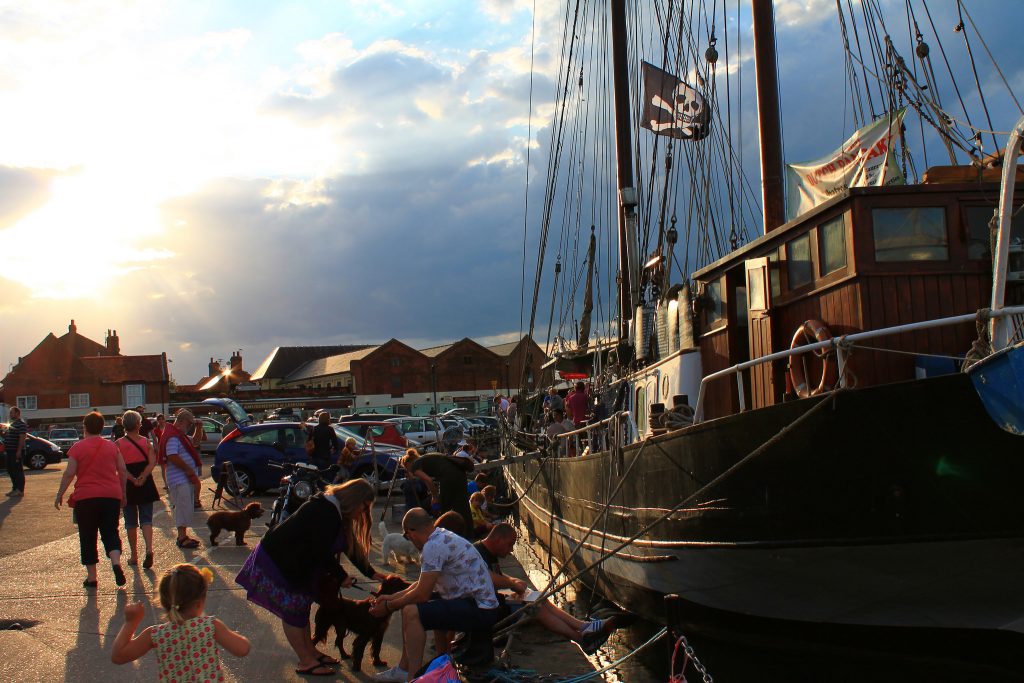 Wells beach is about a mile from the town. It’s a lovely walk up on an embankment alongside the estuary or you could take the train. There’s a miniature railway which runs down to the beach and back if you don’t fancy walking.

Train Times: Weekends from Easter until Spring Bank Holiday then daily until September. Then weekends until the end of October. Trains run from 11am.

Down at the beach, you’ll find some lovely colourful beach huts where people come to relax. If you fancy buying the one they usually start at around £50,000 each.

There’s also a massive expanse of sand to really stretch out and enjoy yourself. Just be aware of the tide as it can come in quickly and has left some people stranded on the sandbanks further out!

The massive open flat beach at Brancaster if perfect if you have a four legged friend who needs to burn off some energy.

Look out for the shipwreck of the SS Vina just off the coast. She was used as target practice by the RAF during World War 2 but ran aground here in 1944 and has been stuck ever since. The ship was originally used to transport cargo between England and the Baltic States.

Many visitors like to head over to inspect the ship at low tide but there’s a fast flowing channel of water to cross and several people have died trying to reach the wreck so be warned.

The beach can get pretty windy sometimes and it’s a popular spot for flying a kite. If you’re feeling a bit more adventurous you could try your hand at Kitesurfing in the dedicated area along the beach.

The nearby village of Brancaster was nearly destroyed in the 1960’s to make way for a launch site for the British Space Programme at the time. Luckily for the locals the exploration of oil in the North Sea put a stop to the plans.

Holkham beach became famous after it featured in the 1998 Oscar-winning movie Shakespeare in Love starring Gwyneth Paltrow. The beach is massive, totally unspoilt and was voted the best beach in Britain by 10 leading travel writers recently. 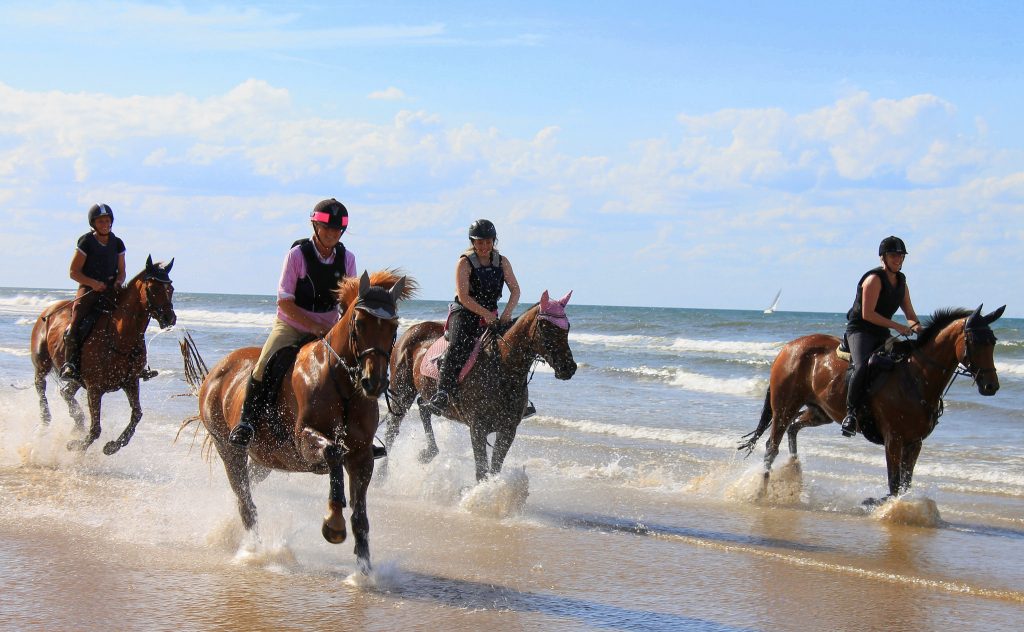 Park at the large carpark close by (along Lady Ann’s Road) and then take a pleasant walk on boardwalks through the pine woods before you reach the beach. It feels like a very Baltic style coastline as you emerge from the pine trees out onto the flat sands of Holkham.

Look out for the stunning purple Sea Lavender (Limonium) growing near the beach in the summer, it smells lovely.

This is another area popular with dog owners due to the amount of space for a run and a sniff about.

It’s not just dogs that come here to run around though, sometimes you will spot horses galloping along the expansive beach. They may well be part of a Royal Regiment which guards the Queen in London as sometimes the horses are transported up to Norfolk to get some much needed fresh air.