Vang Vieng, Laos – A Town on the Mend?

Vang Vieng is a funny little place. Sitting in beautiful surroundings by the Nam Song River, it’s been an easy stop off on the well trodden tourist path between Luang Prabang to the north and the capital of Vientiane to the south for decades.

A History of Hedonism

The town first rose to prominence in the 1960’s as part of the ‘hippy trail’ stretching down from Afghanistan and India to the north but became a no go zone during the American War due to the heavy bombing endured for over 9 years from the mid 60’s.

After years spent restoring the local countryside to it’s former productive glory after the war ended in 1975 it again became famous with backpackers in the late 1990’s.

The story goes that one enterprising local, Thanongsi Sorangkoun, owner of an organic farm in Vang Vieng, bought a few rubber tubes for his farm volunteers to relax on along the river. He had inadvertently begun the activity of ‘tubing’ on the Nam Song River. 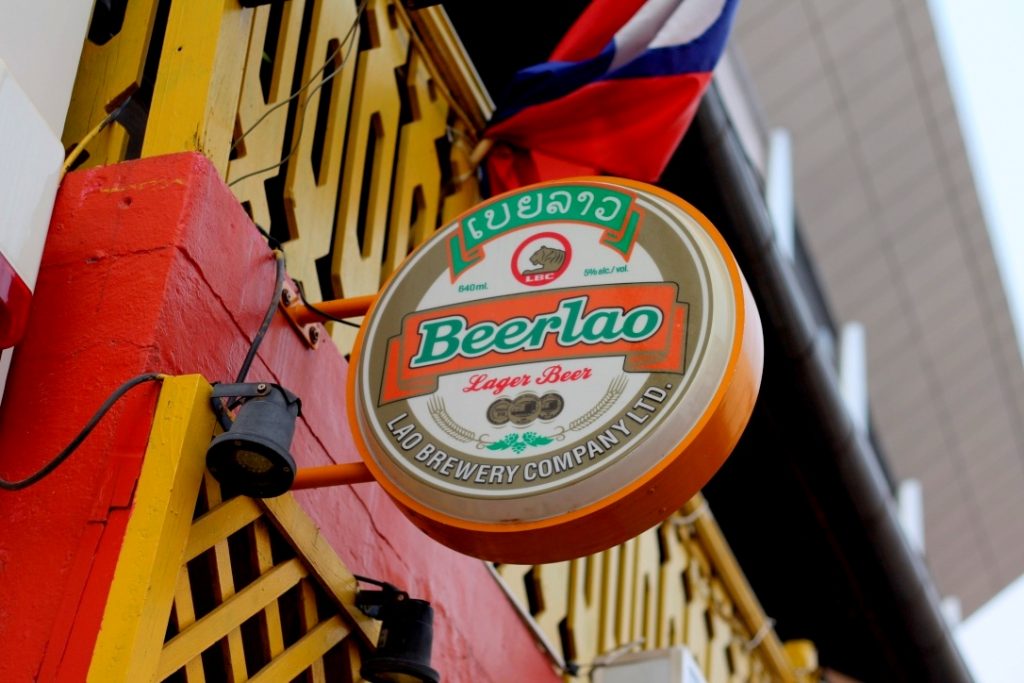 Van Vieng soon became known for tubing but more so for the bars that popped up along the riverside to supply the tubers with Beer Lao and Lao Lao (45% local whisky) to help them on their way. Some bars created zip lines and rope swings into the river and the bars became notorious for supplying drugs and magic mushrooms alongside the booze. 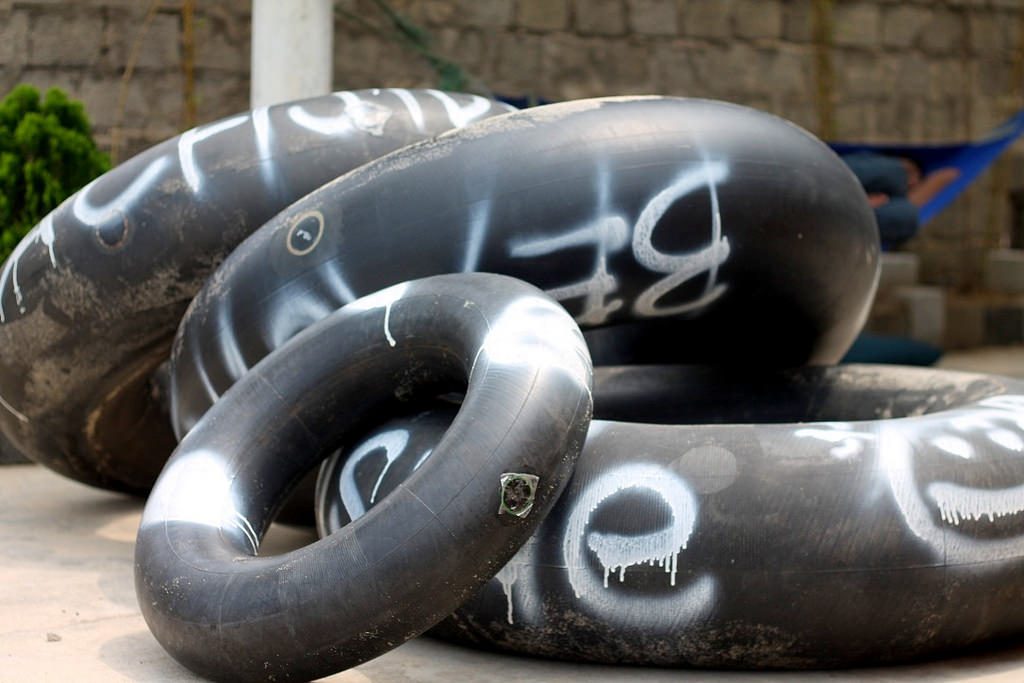 By late 2012 the government was finally forced into a crackdown on the now out of control party scene in the town after several deaths in and around the river. People were jumping in and smashing themselves on rocks, drowning in the river or simply overdosing on alcohol and drugs. Many of the bars were pulled down in an attempt to clean up the town and banish the images of an ‘anything goes’ party place.

[two-thirds-first]TOP TIP: To find the best prices for air or bus travel in Laos we would recommend using the locally based travel website called 12go.asia.

We used this site to book most of our journeys in Southeast Asia. Best of all, you can just show any ticket on your smartphone when boarding your bus. That saves any running around to find a place to print your vouchers!

Try their site via the search box here. Simply pick your travel date for a full page of travel options in Laos and beyond![/two-thirds-first] [one-third]

If you know the backstory above then it’s easier to understand why the town looks and feels like it does today. When we visited in March 2016 we could see both sides of the situation. There are big gaps in between some of the buildings, some are derelict or permanently closed and there are more hotels under construction. This gives the town a very rough and ready feel, like there’s just been a natural disaster and they are trying hard to rebuild it.

If you move away from the central area you can see a different side to the place. Across the river there’s a chilled spot with ramshackle platforms in the river where you can get a beer or a snack but there’s no crazy party here anymore.

Just on the northern edge of the town things feel a little different. This is where we found the excellent Earth Bar and a couple of coffee shops alongside a few boutique hotels and hostels. It seems that a new breed of more refined and caring business is developing on this side of town alongside the river, things look promising here. 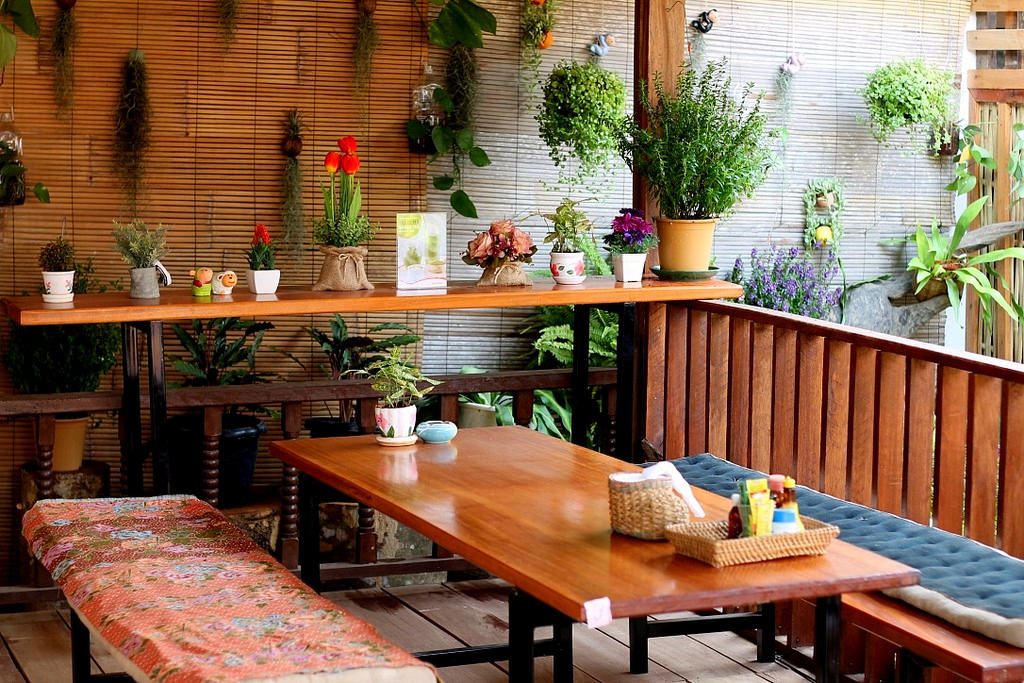 Tubing is still big business and we still saw a few thoroughly fucked up people being ferried back into the town via Tuk tuk after a good session on the river. There are still a few places to get boozed up before launching yourself down the Nam Song in an old tractor inner tube but it seems fairly low key overall.

In town there are even a few bars clinging onto the party days and were were offered a ‘special’ menu with mushrooms, weed etc. when popping in for a beer but again this was low key. Quite hilarious was the place that still shows a constant loop of Friends to vegged out backpackers, some habits die hard. Despite wanting just walk on by I admit that we stood there for a few minutes trying to work out which episode/season it was. What is it about that show?!

From Party to Adventure?

So with the demise of the party scene there’s been a definite drop off in the number of backpackers from Europe, America and Australia seeking a lawless party den. The town is now promoting itself as an activity centre, the place to come rock climbing, kayaking, hot air ballooning and more in SE Asia.

The new market appears to be affluent folks from China, Japan and closer countries. With this new market comes the need for a better class of accommodation than the smelly $5 a night dorms previously on offer. Construction is currently under way with a few new hotels emerging alongside the river but time will tell if this can be a lasting change. We’d like to head back in 5 years and see.

Enjoyed reading this post? Have a look at the Vang Vieng Mini Guide

Have you been to Vang Vieng? Did you visit pre 2012? Let us know your thoughts in the comments below… 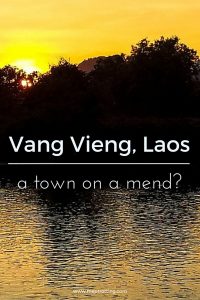