The blinding White Temple (Wat Rong Khun) was sparkling in the sun upon our arrival. If there’s one, a rather unexpected sight to behold in Chiang Rai, this is it. Our Lonely Planet Guide was right!

After being in Chiang Rai for a couple of days and enjoying our Thai cooking lesson with our host Ann it was time to explore beyond the city limits.

The sense of freedom  that we’d enjoyed after hiring at a scooter at Chumphon Beach inspired us to hop on a bike once again and so I headed off towards the city centre to find a hire shop.

Where to Hire a Scooter in Chiang Rai

The best bet for decent scooter hire in Chiang Rai is the area around the central bus station. It was Sunday, so when I set out to find one of the many tour agencies, most of the hire shops were closed. This may have been a good thing as I opted for a small hire place along the Phaholyothin Road which cost 200 THB per 24 hours and they were fine when I returned it 2 days later, my passport was given back to me with no hassle. I forgot to make a note of it so can’t tell you the name or exact location but there were a few other hire shops close by to choose from when open!

Blinded by the White 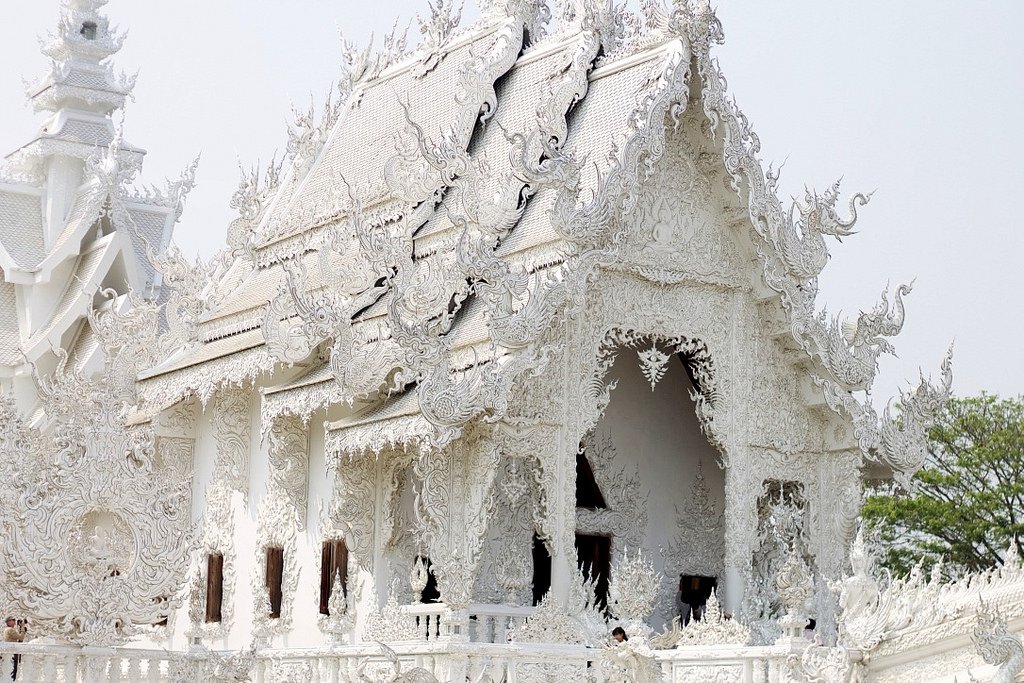 After heading back to our accommodation to pick up Kristina we donned our sexy helmets and made our way onto Highway 1. This road runs right through the centre of Chiang Rai from north to south and it’s easy to navigate your way anywhere from it.

We followed it south for around 13km until we reached the right turn for the blinding What Rong Khun Temple. Somehow we missed this unbelievably White Temple initially, maybe we were so focused staying out of the path of the big trucks and pickups hurtling past our tiny scooter. 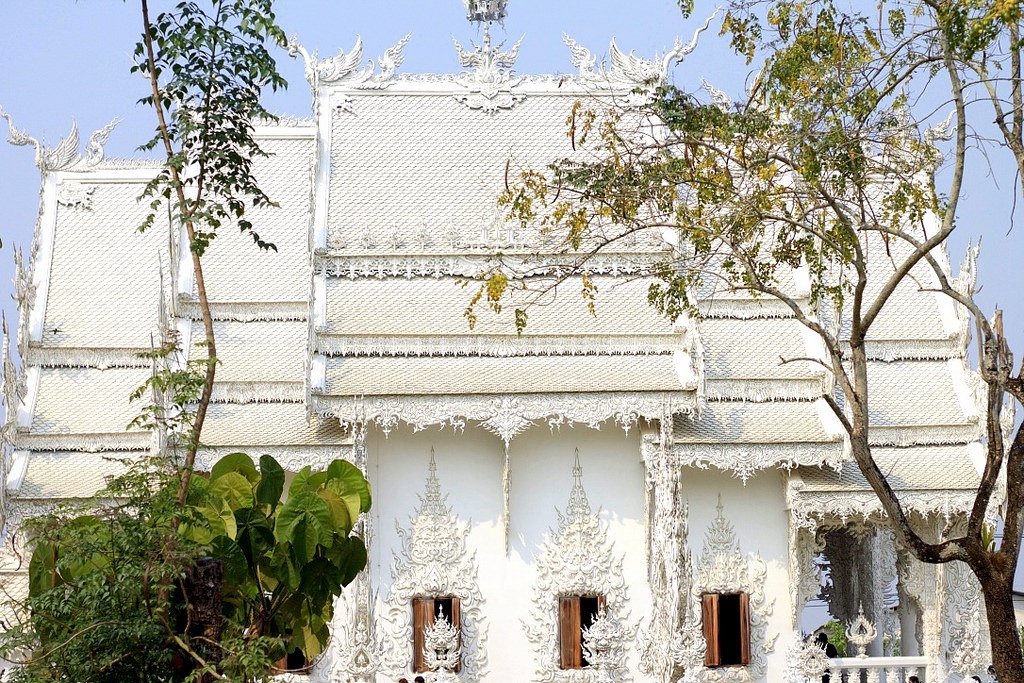 After a swift U turn we pulled into the car park and searched for a spot out of the now intense midday sun. We opted for a couple of bowls of simple but tasty noodle soup (50 THB each) at the on site cafe before heading to check out the White Temple.

Antoni Gaudí, Eat Your Heart Out 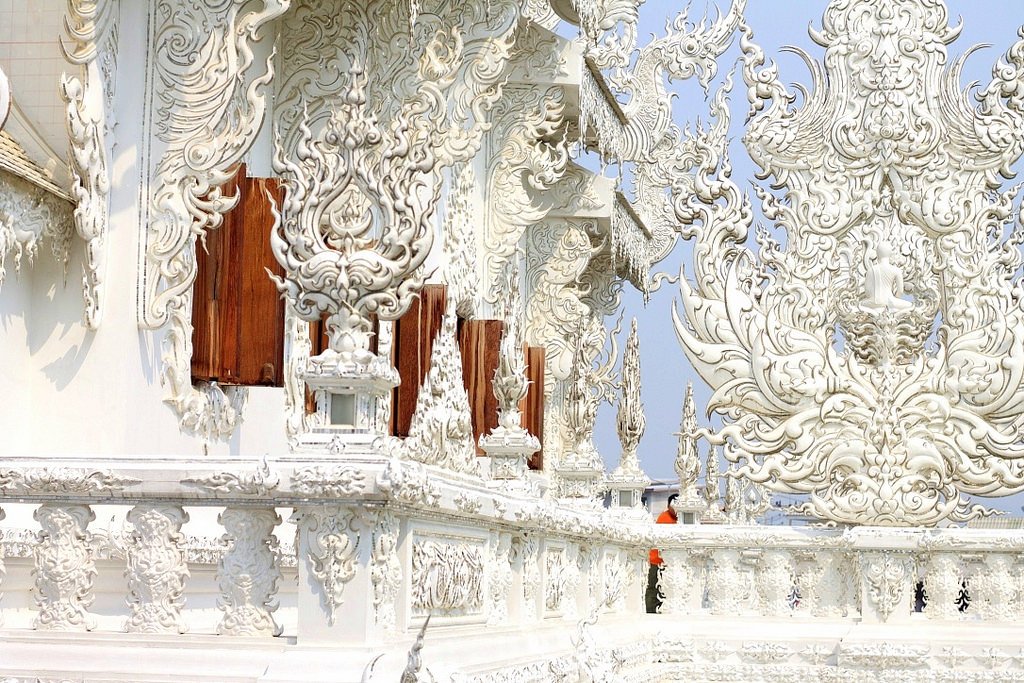 Chalermchai Kositpipat could certainly give Gaudi a run for his money. He’s the Thai artist behind the White Temple project and has spent 40 million THB of his own money on it so far. The main temple (ubosot) is part of a larger complex of buildings. The vision is for 9 structures when completed, but this is estimated to be around 2070. Reminds me of a certain Spanish cathedral.

Even from a distance you really can’t miss this place due to the thousands of tiny fragments of mirrored glass glinting away from all sides of the main temple structure. The Ubosot is the main temple building closest to the road and jumps out at you immediately with it’s bright white render, it’s practically blinding in the bright Thai sun.

There’s an admission gate to pass through and although free when we visited (March 2016) there will be a 50 THB charge for admission introduced soon. 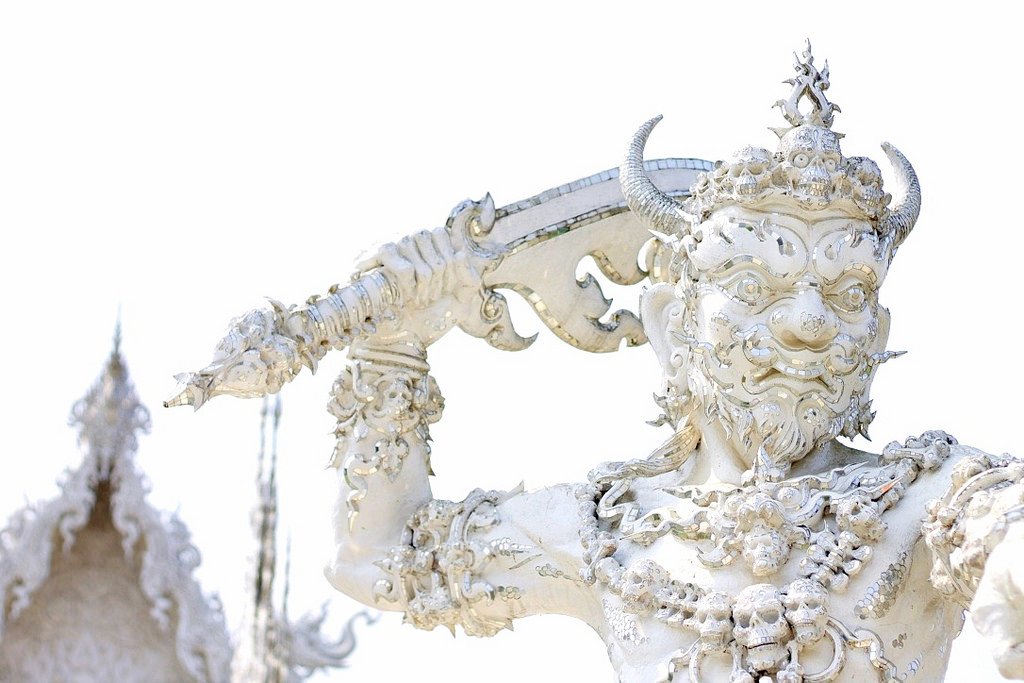 This place is packed with symbolism and takes a bit of studying to absorb it all. As you approach the temple you pass over the bridge of the ‘cycle of rebirth’ with lots of stone hands reaching up towards you like a bad dream. This represents unrestrained desire which you must forgo if you are to be truly happy apparently.

You then pass through the ‘gate of heaven’ and up the steps to the inside. Compared with the pure white exterior the interior is mostly a dark red with several murals painted on the walls. As this is an authentic Buddhist temple where people come to worship but there are some rather strange images painted onto the walls. Images like the Twin Towers on fire, nuclear warfare, oil pumps, Michael Jackson, Harry Potter and Mickey Mouse. It’s a rather crazy montage but the overarching message is humanity is evil! 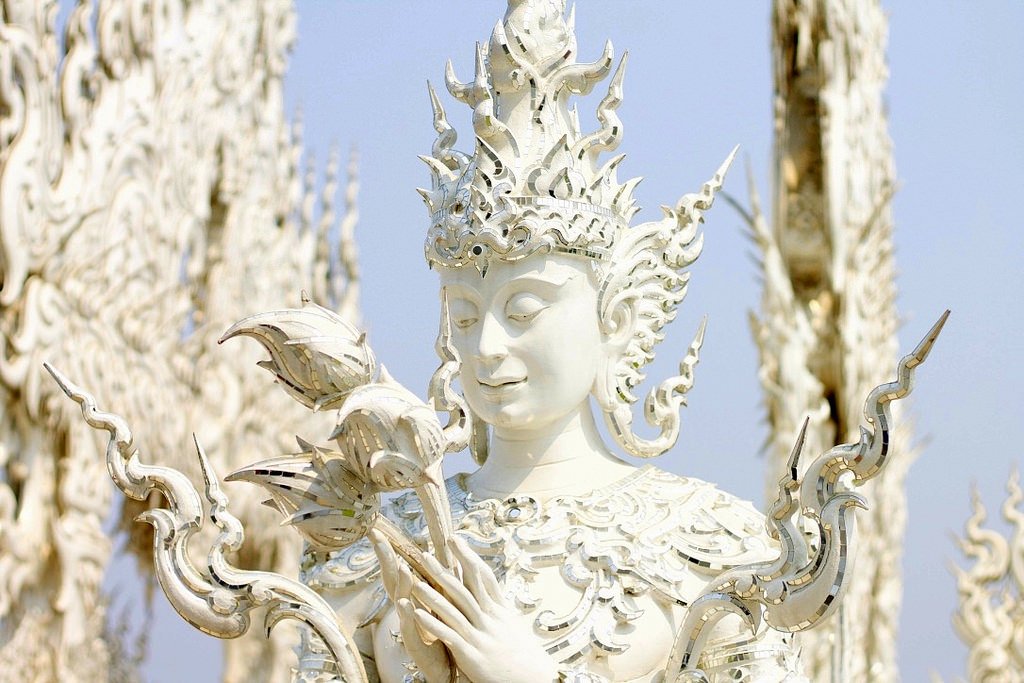 The Most Elaborate Toilets in Thailand?

The other main now completed building is the toilet block. Our artist friend must really value bodily functions after worship as this building is pained from top to bottom in gold and decorated with many fascinating carvings and decorations.

It is without a doubt the most lavishly decorated toilet block I have ever seen and at first thought I was entering a second temple.

After admiring the toilets for a while, as you do, we jumped back on the scooter and continued to the Khun Korn Forest Park Waterfall. Our heads still spinning from the crazy if brilliant sights we had just seen.

How to get to the White Temple

The temple is located just off of Highway 1, around 13km south of Chiang Rai. 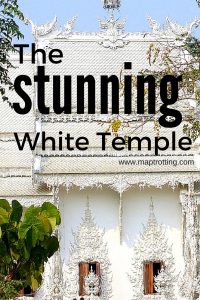