A stay in Hue (Huế- pronounced Huwey) would not be complete without a visit to the stunning Imperial Hue Tombs. The tombs are the elaborate resting places the Nguyen dynasty, who ruled over Vietnam from 1802 until 1945. Dotted along the banks of the Perfume River, which flows through the city of Hue, the tombs are extravagant mausoleums constructed for the former imperial emperors.

Many of the tombs were planned out by the emperors during their lifetimes and some were used as residences while they were still alive. They make for one of the most unique places to visit in Vietnam, close to the Imperial City of Hue.

They are mostly split into two separate areas, an area of temples and gateways and tomb itself. You’ll find them in differing states of repair as they were mostly neglected in the late 20th century before they became a major tourist attraction.

Here’s our rundown on the best ways to explore the Imperial Tombs of Hue.

How to visit the Imperial Hue Tombs

Book a Tour
You can get to many of the tomb sites with an organised guided tour by car or motorbike. We saw one large group on motorbikes (one driver + 1 passenger per bike) at our second tomb stop.

There were about 15 or so people on that tour and they ended up waiting for the slow ones so check how big your group is if booking a tour. It seemed too many people to truly enjoy the atmospheric tombs.

Some tours are combined with lunch and a boat ride so ask at your hotel for a good deal and check the reviews online to avoid any bad guides or tour operators. 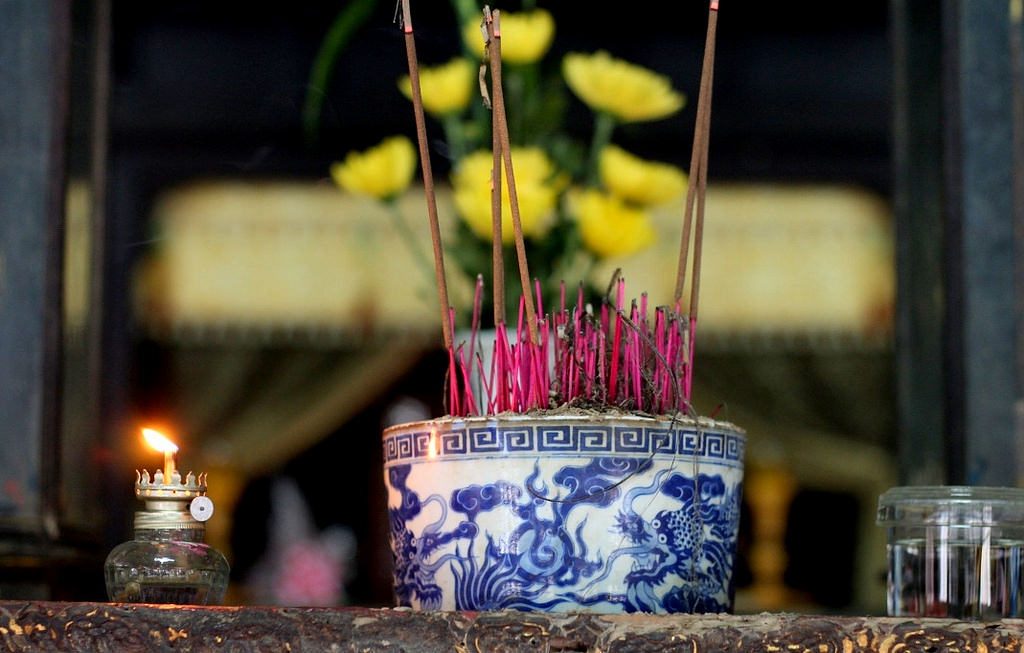 Hire a Cyclo, Motorbike or Taxi
Another option is to negotiate your own price for some local transport. There are plenty of chaps in the city centre willing to take you on a tour of the tombs for a few dollars. It’s really important to clarify which tombs you will be visiting and how long they will wait for you whilst you look around.

Just remember that it’s unlikely that you’ll be getting a professional tour guide into the bargain and the commentary given could be very sketchy. Think of it more as a fun way to get to the tombs and you’ll have a great time.

Hire a Scooter
In true MapTrotting style, we hired a scooter from our  hotel and made our own one day tour. The scooter cost 150,000 VND to hire for the day and a petrol top up cost 50,000 VND. It was hired from the excellent Jade Hotel Hue with no issues.

This works out way cheaper than any of the tours but did involve a bit of research. We pinned 5 tomb locations on Google Maps and then used the app on my iPhone to navigate between them. This is how we got on…

Our first stop of the day just happened to be the best restored of the imperial tombs. It was constructed for Emperor Tu Duc who enjoyed the longest reign of any of the Nguyen dynasty monarchs, ruling from 1848-83.

This chap had over 100 wives and many concubines, so used the tomb complex as a retreat with some of them long before his death in 1883. He lived there from 1866 onwards after a coup against him due to the high taxation needed to complete the various buildings. 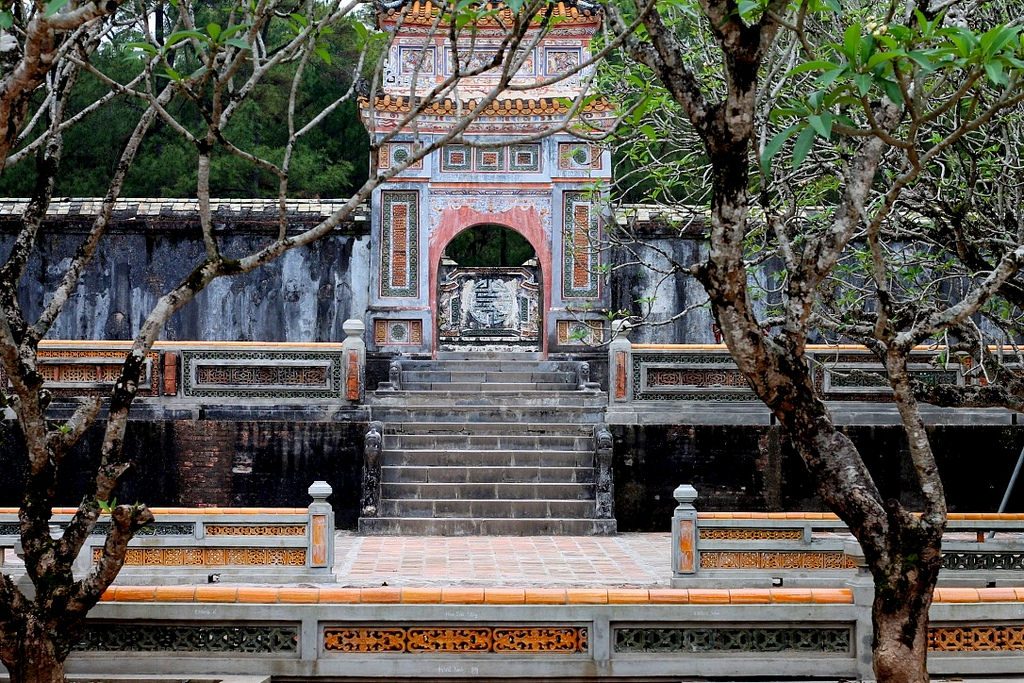 In the end Tu Duc was buried at a different site altogether along with his treasure and the 200 labourers who buried the king were all beheaded afterwards to keep it a secret from grave robbers. Nice. To this day no one is sure where Tu Duc is actually buried.

We visited  at around 10am and found it pretty busy already with a few tour groups passing through so get there early to soak up the tranquil surroundings. 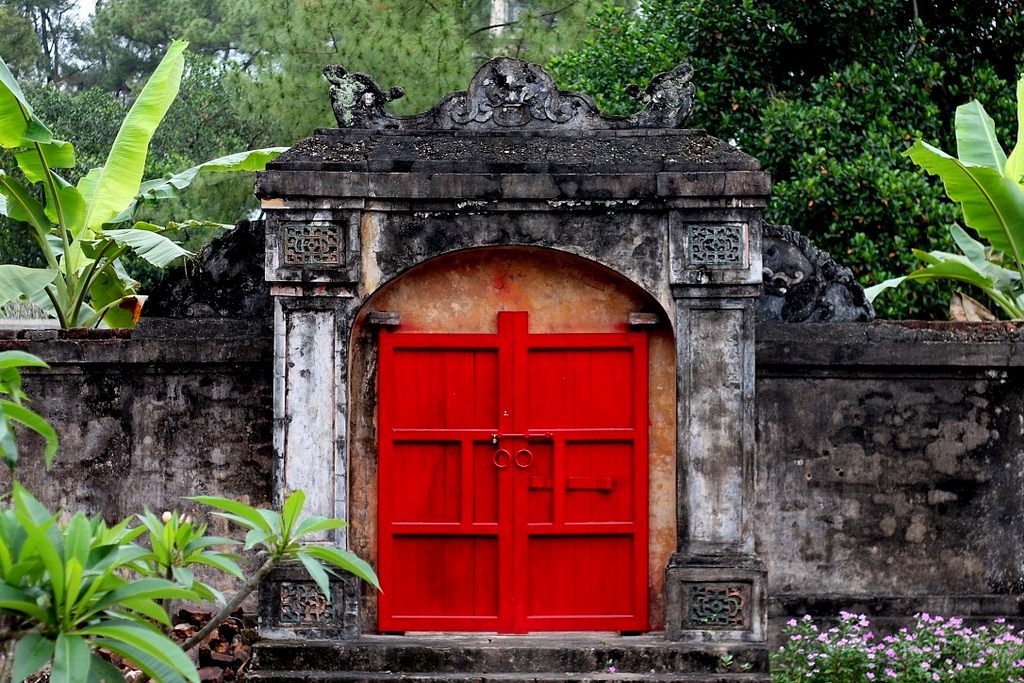 Our second tomb visit was a real contrast to the first. This tomb hasn’t been restored to the same degree as Tu Duc (his son) and that makes it all the more interesting. You get a real sense of the faded glory of these monuments although the temple area has been partially restored. It was declared a World Heritage Site in 2003. 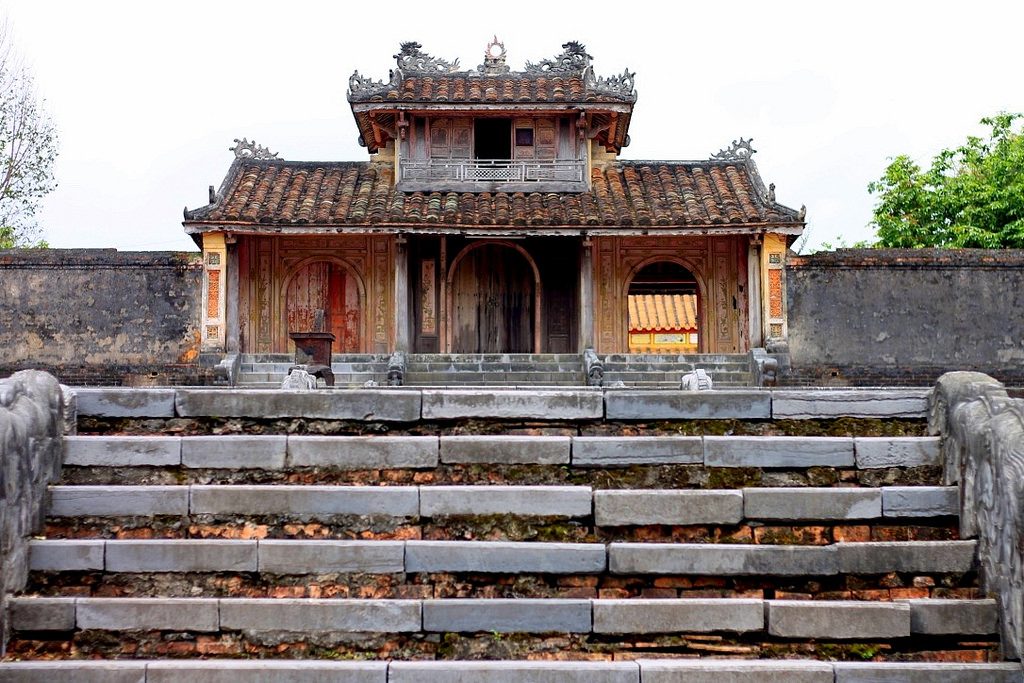 Emperor Thieu Tri is characterised as a leader who didn’t want anyone, servants or otherwise, to devote much time to him and he followed an austere lifestyle. He died early, before his tomb was constructed, so his son Tu Duc followed orders and built a financially modest tomb complex in just 10 months.

Apart from 1 tour group we were the only visitors at around midday. Possibly the lack of tomb buildings and facilities deters visitors but it’s worth seeking out just for that reason. 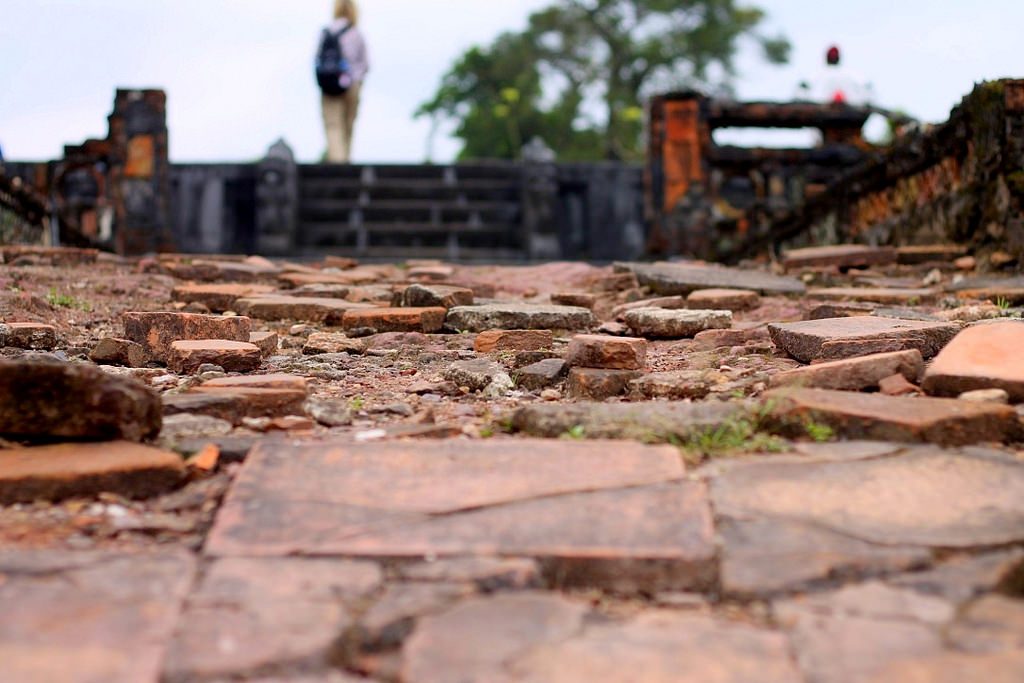 On the opposite side of the Perfume River in An Bang village, this tomb is built in a stunning forest setting. It’s been mostly restored and when visiting make sure you walk all the way through the temples and gates as the tomb is right at the back of the complex and could easily be missed. 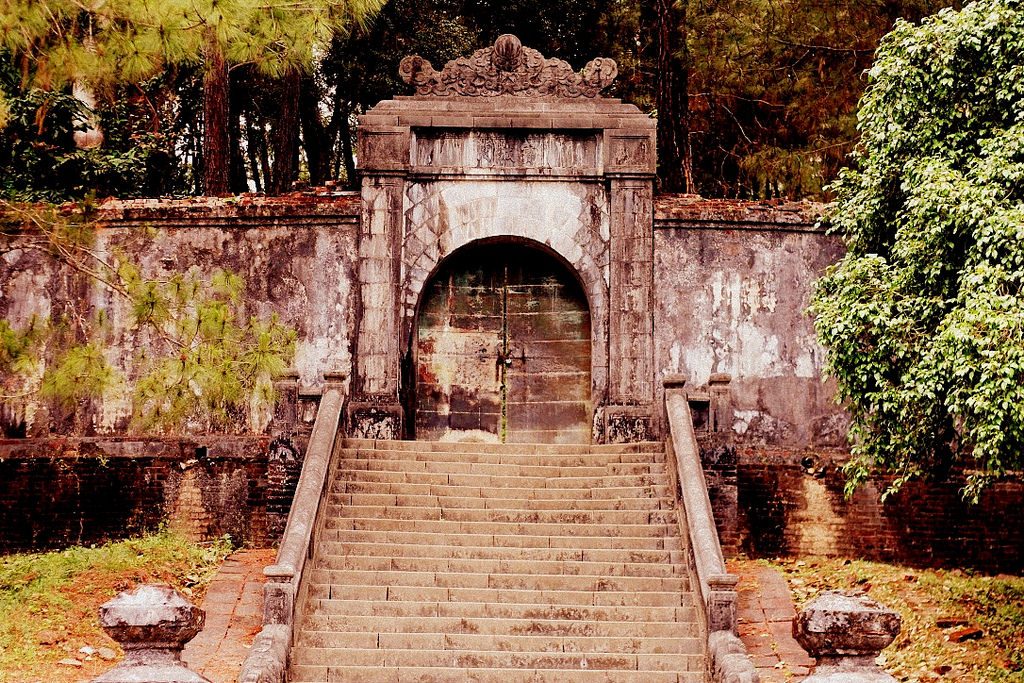 The tomb was planned during the reign of Minh Mang (1820–1840) but built by his successor, emperor Thieu Tri, mentioned above.

We had trouble locating the entrance and Google Maps doesn’t show the road that runs up to the main gate so we stopped at an enterprising local cafe behind the tomb and parked our scooter for the price of 2 drinks. 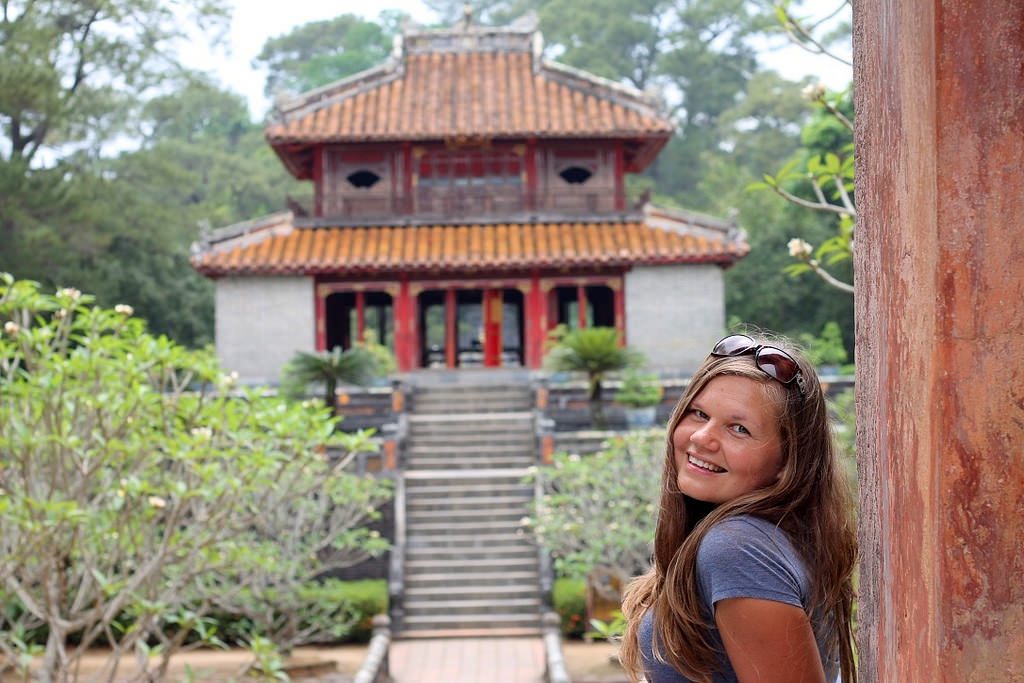 It was pretty quite and peaceful when we visited around 2pm and were able to take our time and get some good shots with the camera. 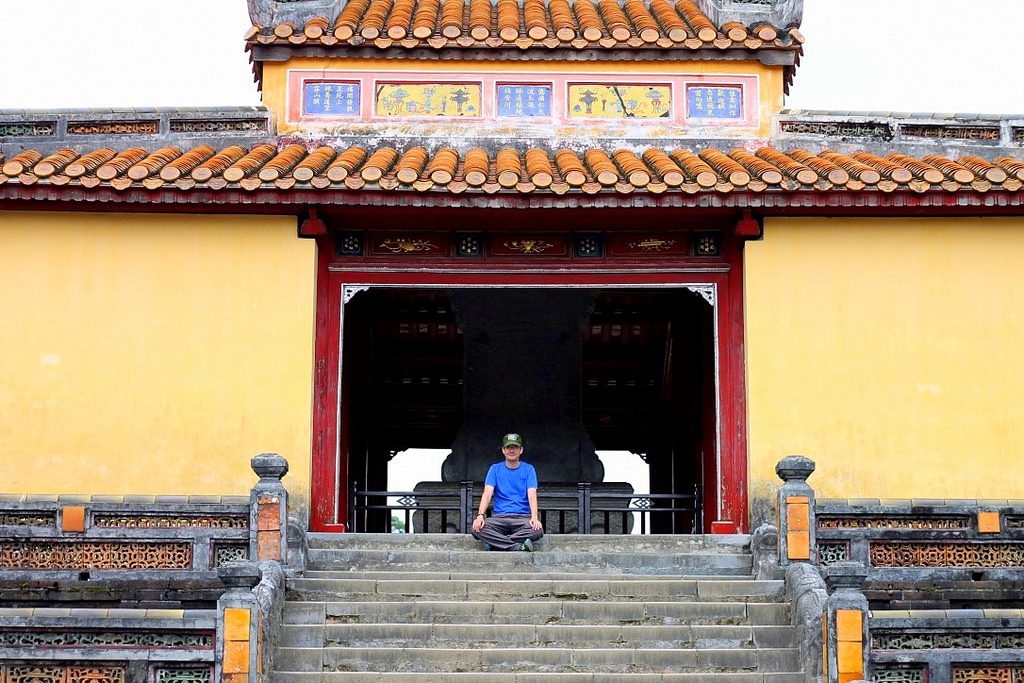 Our final tomb of the day was the hardest to find and most remote of the Hue imperial tombs but well worth navigating the extra few kilometers of narrow country side roads for. The site is not accessible by car and therefore isn’t visited by many tour groups or day trippers.

The area is actually a large complex of several different tombs from Gia Long’s family, some of which have since been destroyed or lie overgrown. It’s the journey there and the peaceful setting of the tombs that really make the visit worthwhile. 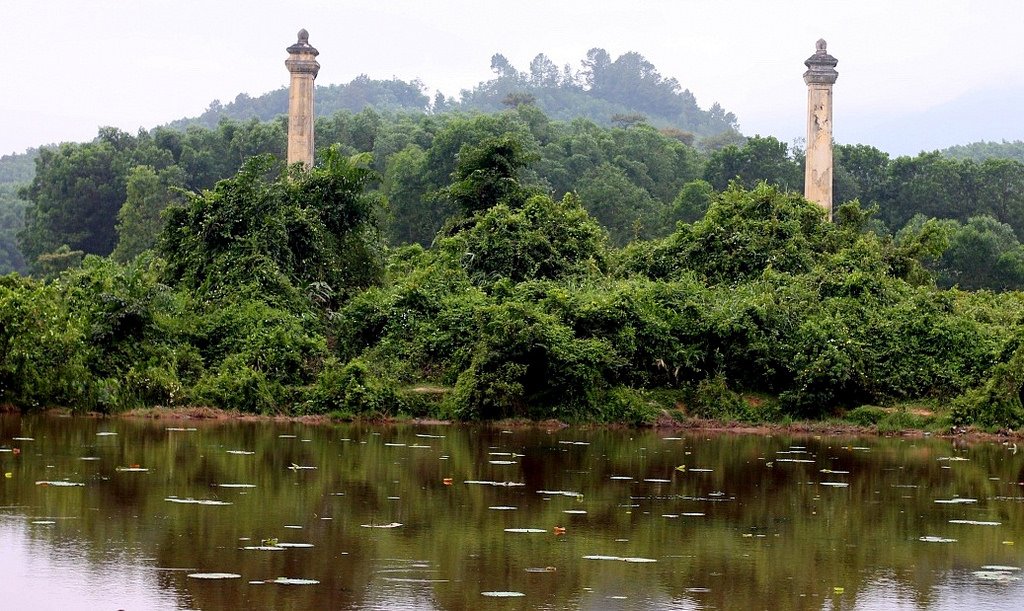 The lack of visitors and neglect at this site underlines the mixed attitude of the Vietnamese towards its imperial past. Gia Long was after all the guy that united Vietnam in 1802 as the self proclaimed first emperor of the Nguyen dynasty and yet his tomb lies mostly neglected.

He was seen as taking Vietnam backwards and copying the Chinese rather than engaging with the western world. Gia Long set the precedent of emperors building their own elaborately decorated tombs modelled on the style of the Chinese emperors. 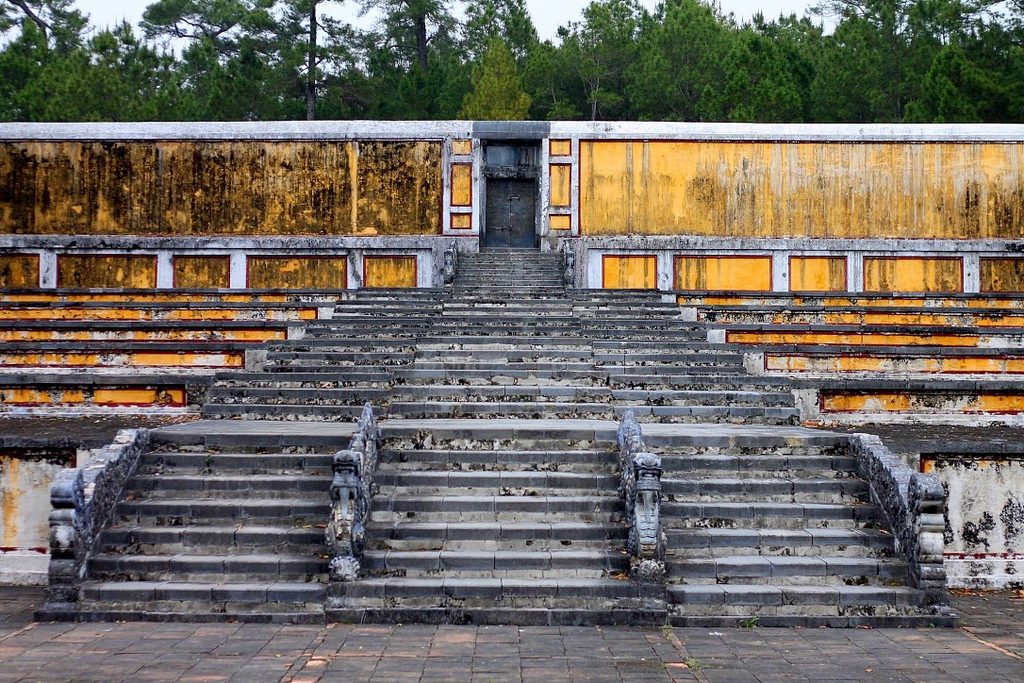 This remote tomb visit was an extra special way to end a great day of tomb spotting. We’d thoroughly recommend grabbing yourself a scooter and setting out early with a day pack of refreshments to explore these stunning structures. 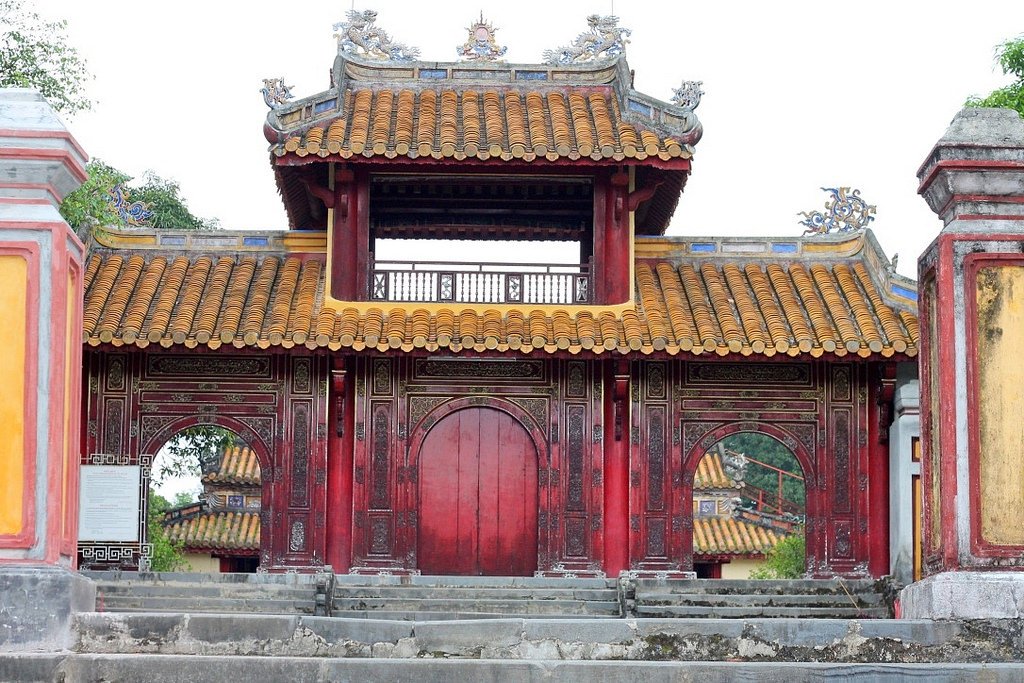 Entrance fee: Free (we tipped the security guard as he was nice)

Have you visited the Imperial Tombs of Hue? Which one was your favourite? Let us know in the comments below… 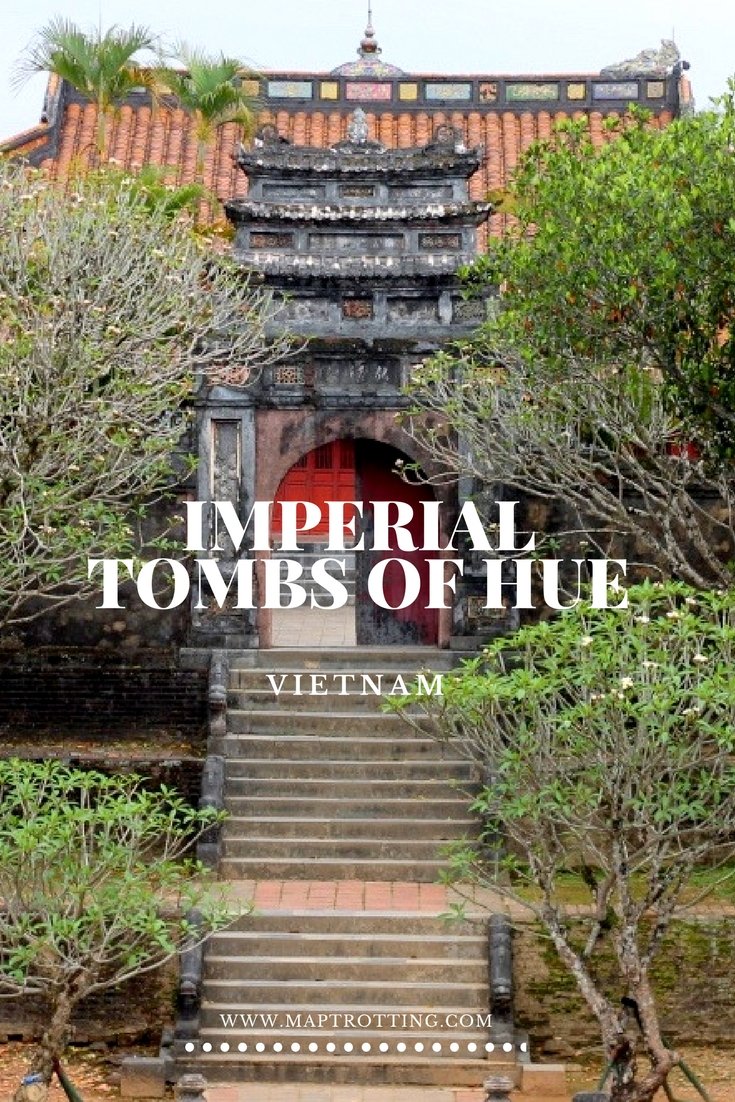 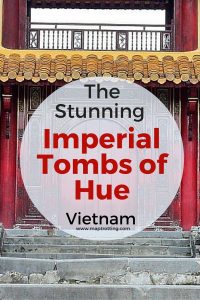