Paradise Cave: Visiting the Most Beautiful Cave in Phong Nha

Located in the spectacular Phong Nha-Ke Bang National Park, a UNESCO World Heritage Site, the Paradise Cave in Vietnam is a must-see destination in Vietnam.

Home to the 360-million-years-old rock formations, the 31km long Thien Duong Cave is the longest and the most beautiful cave in Phong Nha, the central province of Quang Binh.

Phong Nha, although tricky to get to, offers a nature escape for every visitor. From caving to bike rides in the national park or chilling by a pool in a farm stay, there’s much to do here. But if you only have time to do one thing, make it the Paradise Cave.

Post updated: February 2020 | Disclaimer: This article contains affiliate links, we may receive a small commission for any purchases at no extra cost to you. Lovely.

Shortly after his remarkable discovery, it was fully explored by a caving squad from the British Cave Research Association who were so impressed with the interior of the cave that they named it the Paradice Cave.

During the initial explorations, the British scientists believed that the cave is no longer than 5 km but after further investigation, they realised it goes 31km deep making it the longest cave in the area. Maybe even the longest dry cave in Asia.

Shortly after the discovery, the 31m long cave was declared the longest cave in Phong Nha-Kẻ Bàng National Park and opened to the public in 2010. Although as a visitor, you can only explore the first kilometre of the cave which is just about enough to see why it’s called Thien Duong Cave.

The scale of the cave reaching 72 m and 150 m wide is breathtaking. You’ll feel the cathedral-like magnitude of the place as you descend into the cave via a wooden staircase.

Considered to be the most beautiful cave in Phong Nha, it’s home to spectacular stalactites suspended from the ceiling like intricate chandeliers and stalagmites rising from the floor in all their glory.

According to the British cavers, it gets even more spectacular the deeper you go, with glass-like crystal stalactites and other amazing formations thriving inside the cave.

The temperature inside the cave is comfortable as is the walkway. Unlike the Dark Cave, you don’t need any special equipment such as headlamps or swimwear, to explore the cave. Still, you should wear comfortable footwear, especially if you opt for the 1,6 km walk to the cave’s mouth from the parking lot.

Fun Facts About the Paradise Cave

Not to spook you out, but in 2012, new scorpion species were discovered inside the Paradise Cave. Don’t worry though, they’re not interested in visitors much and stay inside the nooks and crevices away from all the fuss.

Also, the lights can go out unexpectedly, so don’t be alarmed. They come back up pretty fast. It happened to us just when we contemplated what it would be like here in the dark. Spooky!

Visiting the Paradise Cave in Vietnam: How to Get There

To get to the Paradise Cave, you can either book a tour online, take a local tour, or rent a motorbike to explore it independently.

Tours to Vietnam’s Paradise Cave leaving from Phon Nha or Dong Hoi are often paired with Phong Nha Cave. That’s a great way to explore more than one cave if you are in the area for a short visit.

The tour lasts for 8 hours and includes a pickup, a boat cruise, lunch and entrance fees to both Paradise Cave and Phong Nha Cave. You’ll start your tour by arriving at the famous Phong Nha Cave followed by lunch in a local village and then proceed to the Paradise Cave.

Some tours will give you time to explore the Tien Son Cave, which sits 100m above the Phong Nha Cave and can be accessed via steep stairs. Some dragon boat skippers wait until you explore so check with your guide whether the Tien Son Cave is an option on your tour.

If you’re interested in visiting the Paradise Cave beyond the first kilometre, take a look at the Phong Nha Farmstay’s 7 km Paradise Cave tour. For around 2,650,000 VND ($119 – minimum two people) the tour includes a swim through an underground river and lunch.

Getting to the Paradise Cave by a Motorbike 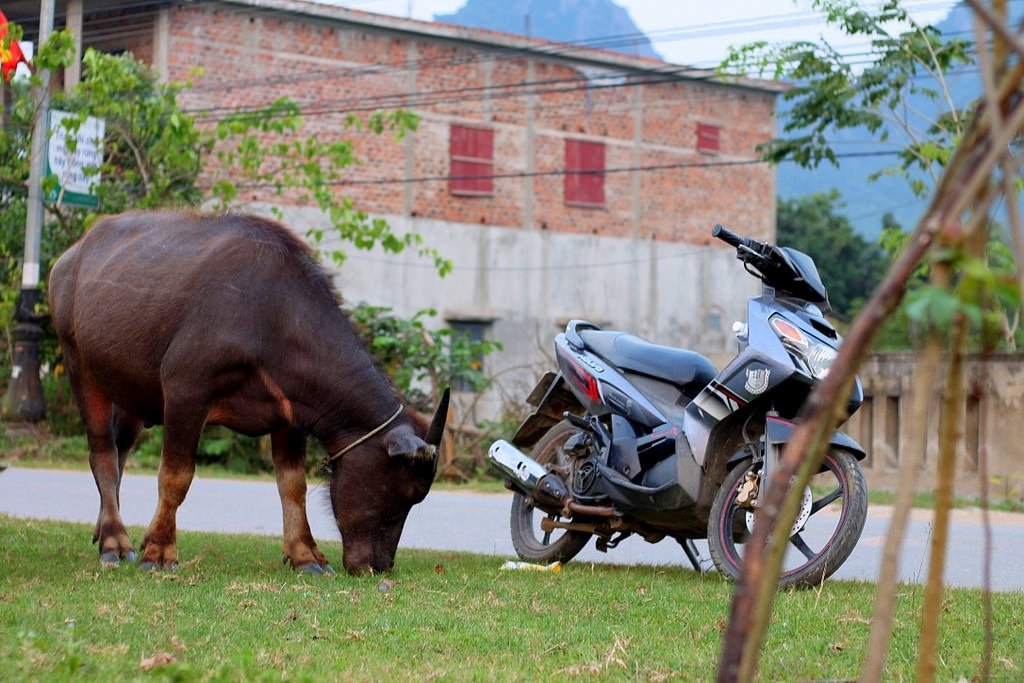 With spectacular views and slow traffic, renting a motorbike to explore the Paradise Cave in Vietnam is a great option if you don’t mind operating one.

If you decide to take a scenic trip to the Paradise Cave by a bike, ask for a map at your accommodation. Most of the places will have information leaflets and printed maps with a rough, but quite an accurate drawing of where the cave is.

There is a circular road around the national park which you have to follow most of the time so you can’t get lost. There are a couple of little road forks out in the local villages, but the locals will help you out if you are stuck.

Our advice is to pin the cave’s location on the Google Maps on your smartphone, load the whole route while in a WiFi zone and then follow the directions.

Once you get to the foot of the Paradise Cave, there is a pretty large parking space for bikes and cars. From here, you can take a 1km paved and pleasant path through the woods to the cave base. Otherwise, for 15,000 VND, hop on a golf buggy service that you can take near the parking lot.

As you approach the base of the cave, there is a slight challenge ahead of you – a 700 m zigzag climb to the cave’s mouth so be prepared if walking.

The total cost of visiting the Paradise Cave on a motorbike (x2): 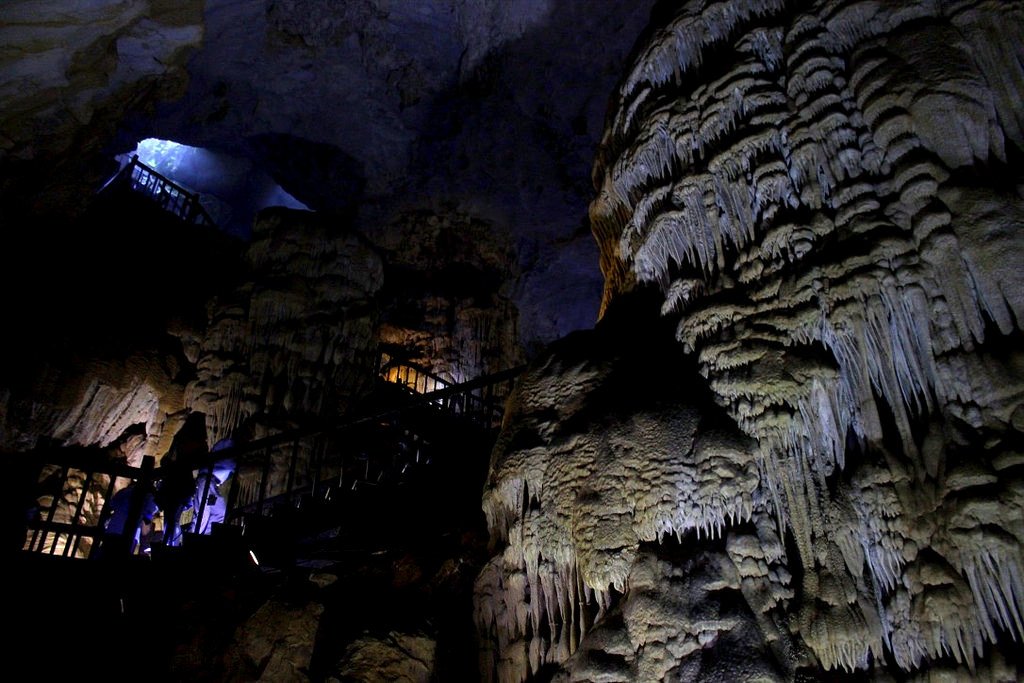 The entrance fee to the Paradise Cave is 250,000 VND ($11.20) per person (if you’re visiting the cave without a tour). You can buy tickets on the site on the day, just make sure to have some cash with you.

Paradise Cave is open Monday – Sunday from 7 am to 4.30 pm. We recommend visiting the cave as early as you can to avoid crowds.

Food Options Near the Paradise Cave

Foods stalls are available in the parking lot and next to the cave entrance if you need to stock up on snacks or souvenirs. You’ll also find a restaurant on the way to the cave where you can enjoy some Vietnamese food after or before visiting, but it’s on the pricier side.

Unless you are going on an organised tour, we recommend packing some snacks with you.

How to Get to Phong Nha

The Paradise Cave is located in the Phong Nha National Park, 60 km northwest from Dong Hoi which is on the main train line between Hanoi and Hue. One of the most convenient ways to get to Phong Nha is to catch a sleeper train to Dong Hoi from Nim Binh, Hue or Hanoi and then take a local bus.

To check the train schedules and prices, use the super friendly 12Go Asia website. By using this online platform, you can search, compare and book tickets online. You don’t need to print anything, just show your train tickets on our phone when boarding the train or bus.

Unfortunately, you can’t use 12Go Asia to book your Dong Hoi – Phong Nha bus tickets. But we have a map with directions added to our Vietnam Caves post for more information.

Where to Stay in Phong Nha

Booking accommodation in advance is a smart business during the peak season. Phong Nha is a small town and can get booked up pretty fast. Especially because more and more people are discovering the natural wonders of Vietnam.

Easy Tiger Backpacker Hostel is probably one of the most legendary places to stay in Phong Nha. It’s friendly and serves good food. Heritage By Night is also a good option for spending a night and two on Phong Nha.

There are quite a few farm-stays just outside Phong Nha that offer accommodation with spectacular surroundings. Chay Lap Farmstay and Resort, for example, offers clean bungalows and outdoor swimming pool.

Otherwise, you can book accommodation in Dong Hoi and take a local bus to get to Phong Nha.

Is Phong Nha Worth Visiting?

Absolutely!  Our 3-month visit to Vietnam wouldn’t have been the same should we missed the Phong Nha National Park with its world-class caves. It’s a must-visit destination in Vietnam for any traveller.

Planning a trip to Vietnam? Have you included the Paradise cave to your itinerary? Let us know in the comments below.